Challenge: The Tree of Pearls - Sultana Shajar al-Durr
Have 80 living members of your dynasty
Kill 5 landed rulers if other dynasties with a single character
Have 4 kingdom titles held by females of your dynasty at the same time.
Challenges of the the First-Crowned
"The First of Many" - Bronze - Have one dynasty member who holds two king titles.
"God is Good to Me" - Silver - Have three beatified or sainted family members
"Saint-King" - Gold - Create a Saintly Bloodline

Challenges of the First and Only King
"True Faith" - Have one character rule 4 provinces in a single realm (can be held by vassals) that have been converted to the characters religion from a different religion.
"Writing History" - Build three book collections
"A Pious King" - Have a character with a kingdom title who controls all de jure provinces of that kingdom and has been crowned by the head of his religion. 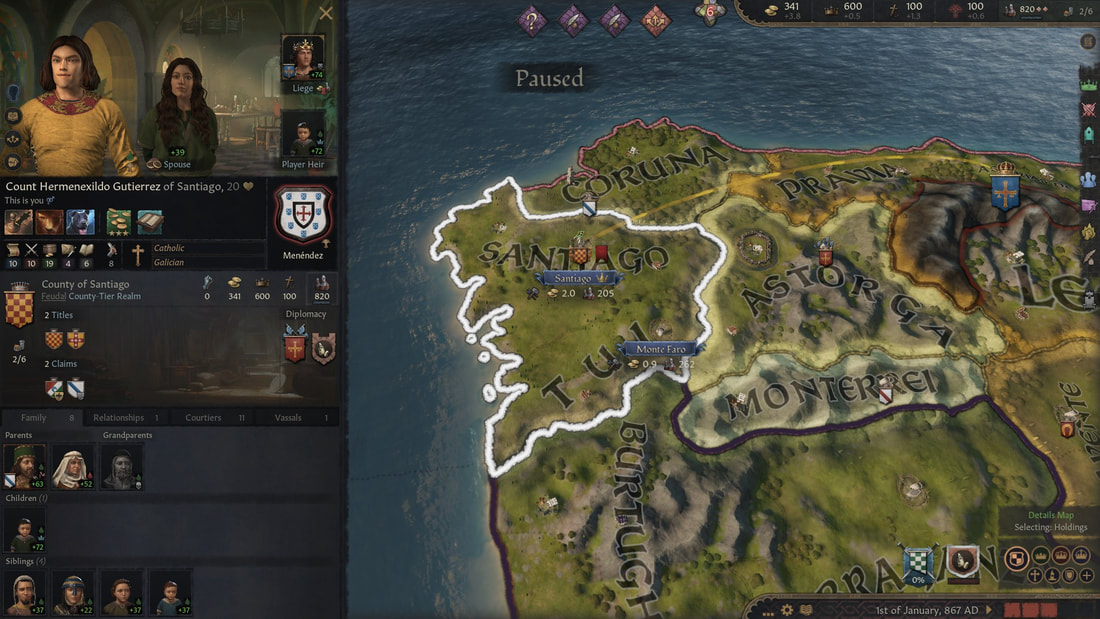 Our earliest reliable records describe how the Menendez family first came to rule Santiago, when the talented son of Count Gutierre of Coruna impressed and befriended King Alfonsu III of House Cantabria, a young man of similar age, and was granted rule of both Santiago and Tui, this pushing the Menendez family from obscurity to one of the most powerful in Asturias. These lands had previously been held by the Duke of Galicia, Froila II, who was executed by Alfonsu III for conspiracy and treason against the kingdom, with no heirs to his titles. Count Hermenexildo loyally served Asturias and King Alfonsu III throughout the kingdom's many conflict with the sultans of Al-Andalus, and it is written that the king considered Hermenexildo his best friend and closest confidant. When conflicts erupted over the rightful rule of Portucale, contested lands on the borders of Christendom, King Alfonsu was amenable to Menendez soldiers protecting the border castles of Porto and Aveiro instead of the weaker Duke Vimara and his son, Lucidio. After the death of his father, the county of Coruna also passed to Hermenexildo and. as the count of Santiago, Tui, and Coruna, Hermenexildo claimed the title of Duke of Galicia, keeping his seat in Santiago. King Alfonsu made his approval of this clear to all, by transferring the vassalage of Hermenexildo's father-in-law, Count Gaton of Astorga, to the new Duke of Galicia. Division among the lords of Al-Andalus allowed the Duke Hermenexildo to expand his reach farther down the southern coast to Coimbra, taking the land by force from Emir B and his allies. The lands of Porto and Coimbra saw much strife between Christian and Muslim communities, however the Duke of Galicia, well known for being skilled in the Arabic and Berber languages, always promoted tolerance and saw no reason why the communities could not coexist. Seen as a gallant knight and the architect of Santiago's emergence as the kingdom's western jewel,  the final days of Duke Hermenexildo's long rule are strangely shrouded in mystery. According to the accounts, Hermenexildo became melancholic after the unexpected deaths of his brother and of his close friend, King Alfonsu III, and disappeared, leaving behind all the well-known symbols of his rule to his oldest son: a favorite linguistics book he was known to have purchased from his vassal, Mayor, a scallop shell that the Duke claimed to have found left for him by St. John on the journey from his home in Coruna to Santiago, stamped with a cross signifying his role as pilgrim and protector of Santiago, and the keys to the famous bell tower of Santiago. Most stories of the Duke's disappearance describe him retreating into the wild hills or sailing off alone to an island, where he waits still to return to Galicia to help his successors in a time a of great need. 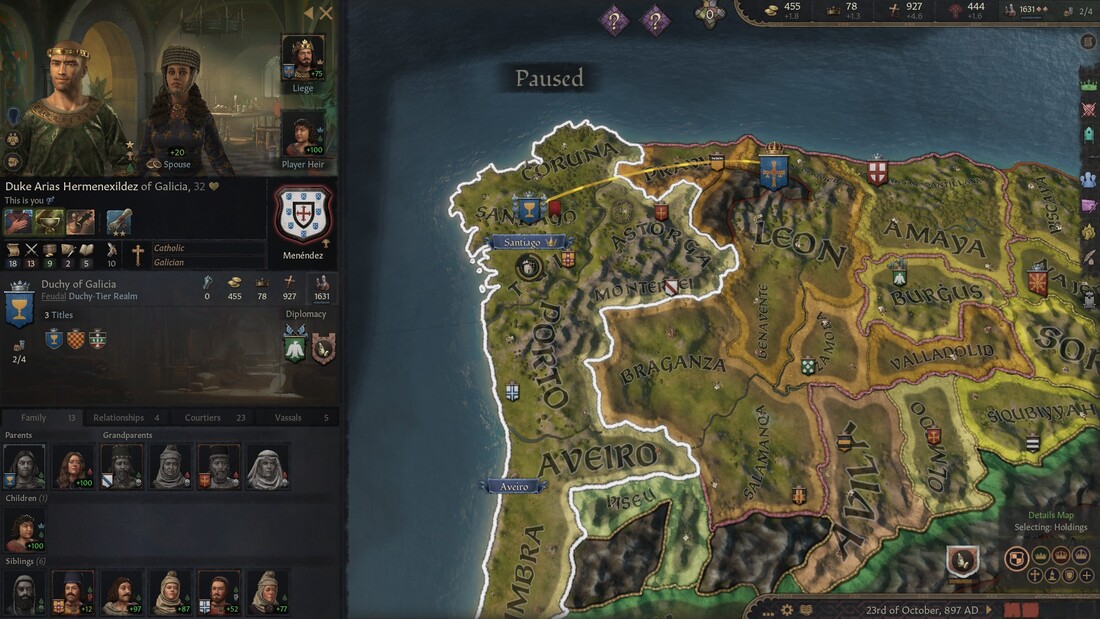 ​901 - Creation of the Menedez Annals