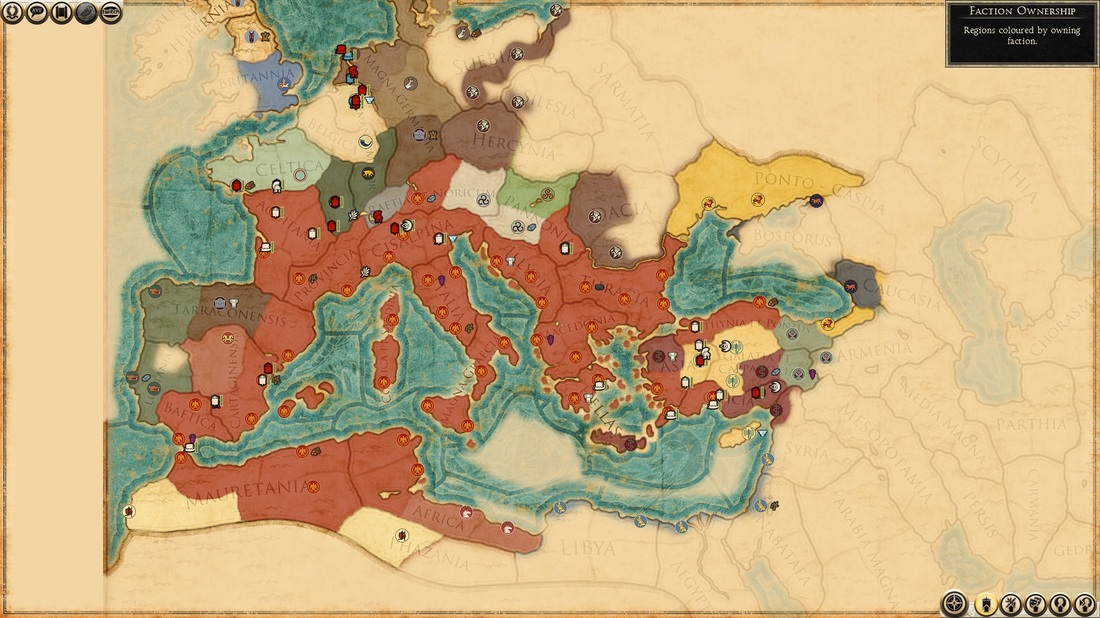 114 BC
​Summer 112 BC – Recent losses on the northern frontier had been feeding anxieties among leaders in Rome. The soldiers of the Republic had only just emerged from the long and costly war in Asia Minor and were not likely to appreciate those who advocated pursuing another. If the profit and glory could not clearly be shown to outweigh the costs, the houses that controlled the Senate would lose their support. Fortunately for the Julii and their rivals, the summer of 112 BC saw the scales shift decisively for the Romans.

Memmius Domitianus, ambitious scion of the Junii, had led his IV Legion deep into barbarian territory in order to ambush an Atrebartes warband. Before he could lead his captives back to the Roman slave markets, Domitianus found himself surrounded by an army three times the size of his own. The stalwart warriors of the IV Legion, with the help of many local Gallic warriors Domitianus had recruited to help fight their kin, carved a bloody path through the barbarian horde and miraculously scattered the disorganized enemy. Domitianus left three quarters of his men dead on the field, but for every corpse in the red livery of the IV Legion, there were four in the tattered garb of the foe. The Atrebartes had seemingly fielded every warrior in the region and Domitianus was pleased to take this unlooked for opportunity to bring his battered army into the nearby undefended settlement of Cenabum which they pillaged and destroyed.

Meanwhile, Terentius Albus easily pushed the Averni out of their great stronghold at Bibracte and had begun transforming the strategically valuable site into a Roman base of operations. After hearing of Domitianus’s great victory near Cenabum, Albus pushed on towards the last holdout of the despised Averni. At Vesontio, Albus found the Averni chieftain and his warband, the Stalkers of Camma, ready to defend the village. Displeased with the odds he saw himself up against, Albus prepared to siege the fort regardless. Reinforcements would soon reach him from the south, where the XVI and XIX Legions had lifted the siege of Medhlan and wiped out the uprising of the Helvetii.
​
The Senate was fortunate indeed that the northern frontier had seen success because the peace with Pergamon held for less time than any but the most pessimistic had foreseen. The Hellenic armies were again on the march, and the unprepared legions of Asia Minor scrambled to defend the Republics interests. 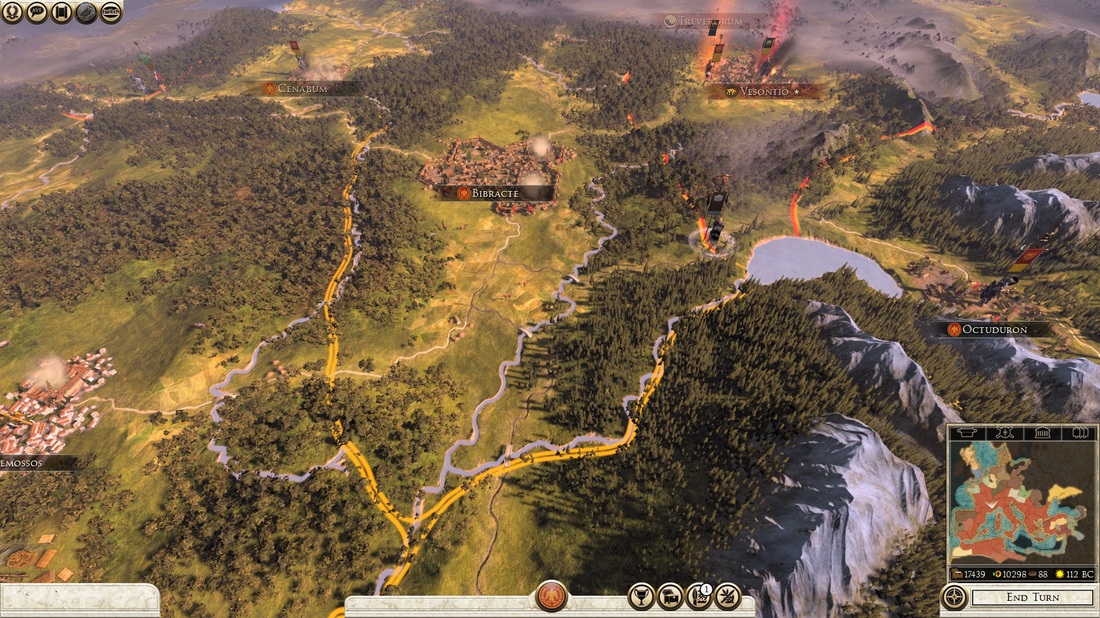 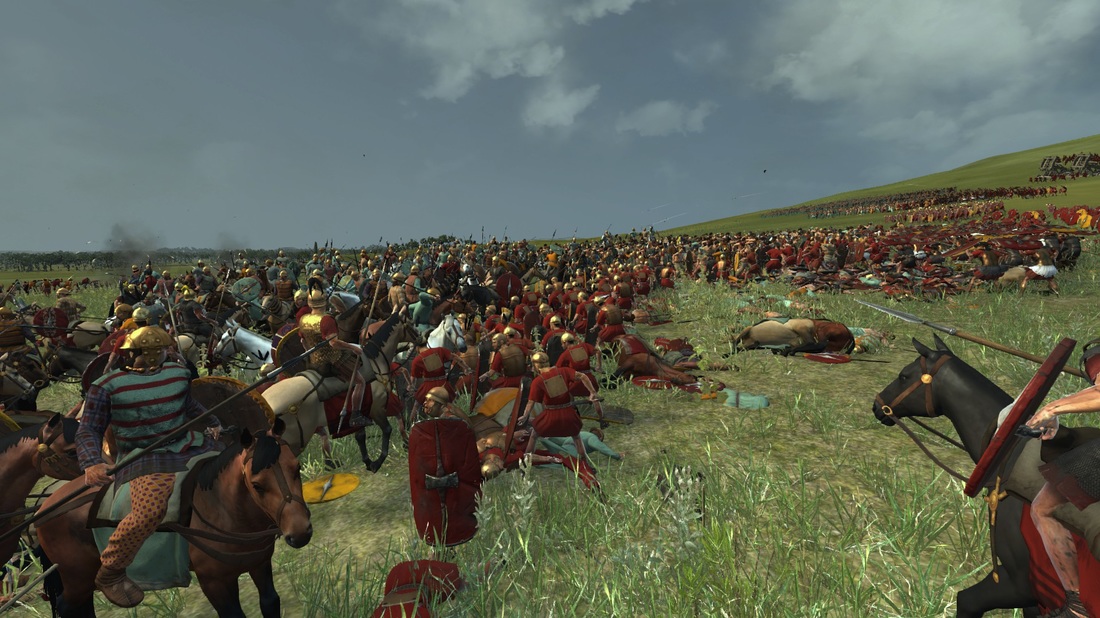 ​Autumn 111 BC – One year later, the king of Pergamon had lost his precarious seat. After the resumption of hostilities, Consul Plinius Marcellus quickly cut off Pergamon itself from the rest of the kingdom by capturing Pessinus. The king’s army, outmaneuvered and trapped deep in Anatolia, was helpless to stop Marcellus from subsequently occupying the great Hellenic city of Pergamon itself. As consolation, the king should have been grateful that his home was taken by one of Rome’s more merciful commanders. Significant areas of Asia Minor had already adjusted to Roman rule and the wise Consul saw great benefit in keeping the local populace compliant and taxable. Pacuvius Modius Arvina, commander of the III Fleet and patriarch of the Cornelii, did not exhibit such restraint when he assaulted the Pergamonese garrison on Crete. After capturing the port he proceeded to pillage Hierapytna to pay for the port’s reconstruction and enslave its inhabitants to man the oars of his fleet. 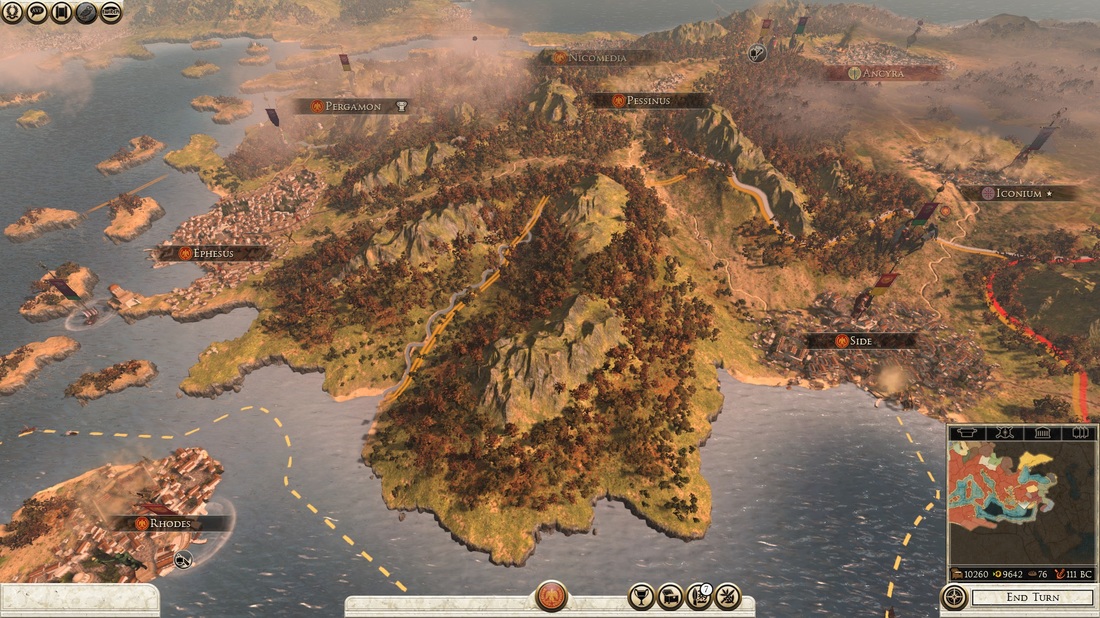 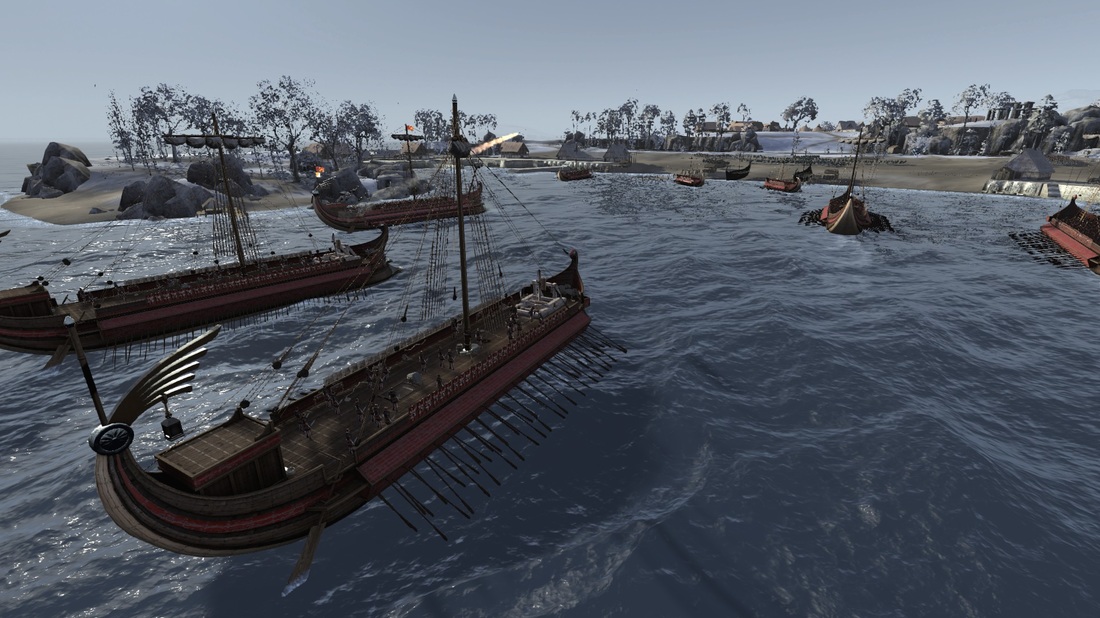 ​Winter 110 BC – The Averni chieftain, Adiatorix, and his host remained surrounded in the stronghold of Vesontio with enough supplies to last years. General Faustus Albus had his men dutifully patrolling the roads and constructing war machines with which he hoped to reach Adiatorix, but he deemed his chances unfavorable until the XVI Legion was able to reach the frontier and reinforce him. The XVI Legion doubled the number of soldiers at Albus’s disposal and brought siege engines of their own to the field built by specialist engineers. With the scales now tipped in his favor, Albus launched his assault on the Celts’ hold and claimed it for the Senate and people of Rome. With Adiatorix killed in battle and his warriors in chains, the Averni ceased to be. 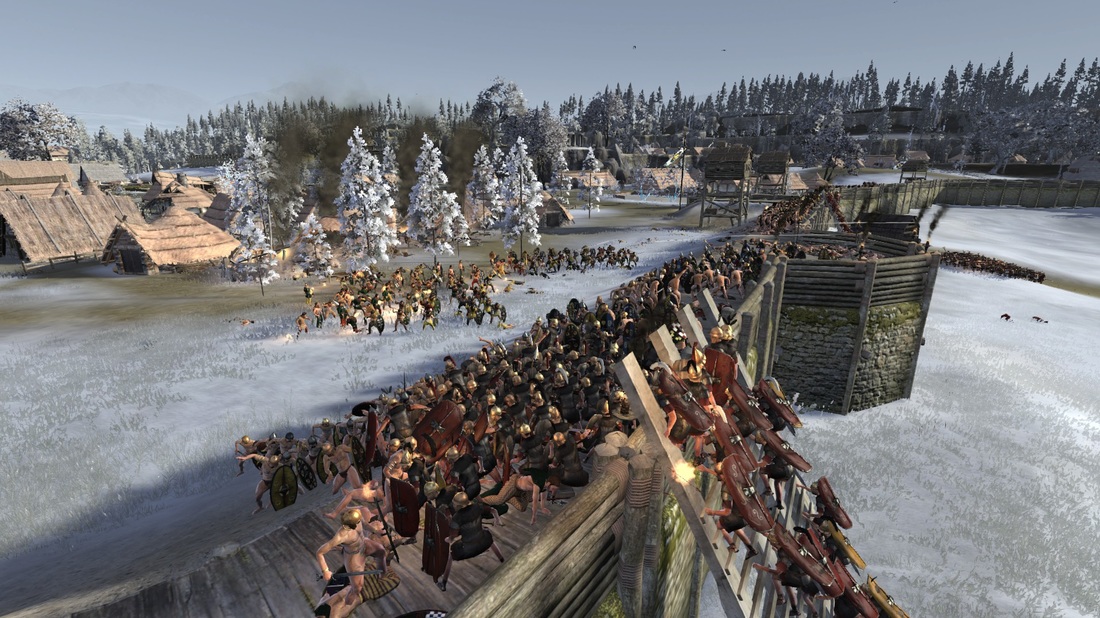 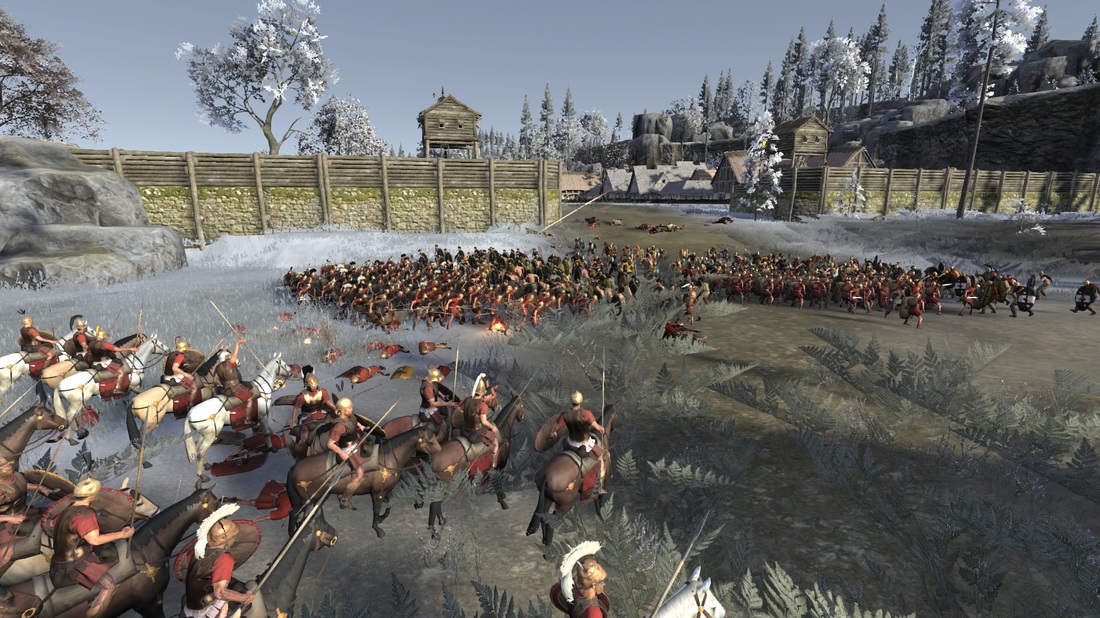 Autumn 107 BC – The Gallic war continued to advance smoothly and the Atrebartes were swiftly defeated leaving only the Nervii standing against Roman control of Gallia. The I, XVI, and XIX Legions had gained much glory during the conquests, and their commanders appeared to be invincible. The III and VI Fleets became famous for exploring the Atlantic coast and Britannia, seizing the valuable town of Namnetum, and opening up trade further north than ever before. Aware that the flow of gold, plunder, and slaves would end soon after the war, ambitious factions in the Senate pushed the Roman commanders to continue their campaigns and invade the isolated realms of Britannia.
​
Far away, Egyptian envoys offered a formal peace with the Republic that would end most of the fighting in the Eastern Mediterranean. The leaders of Rome’s military supported the treaty, and many soldiers that had not seen home in a decade would finally be able to lay down their weapons for a time. 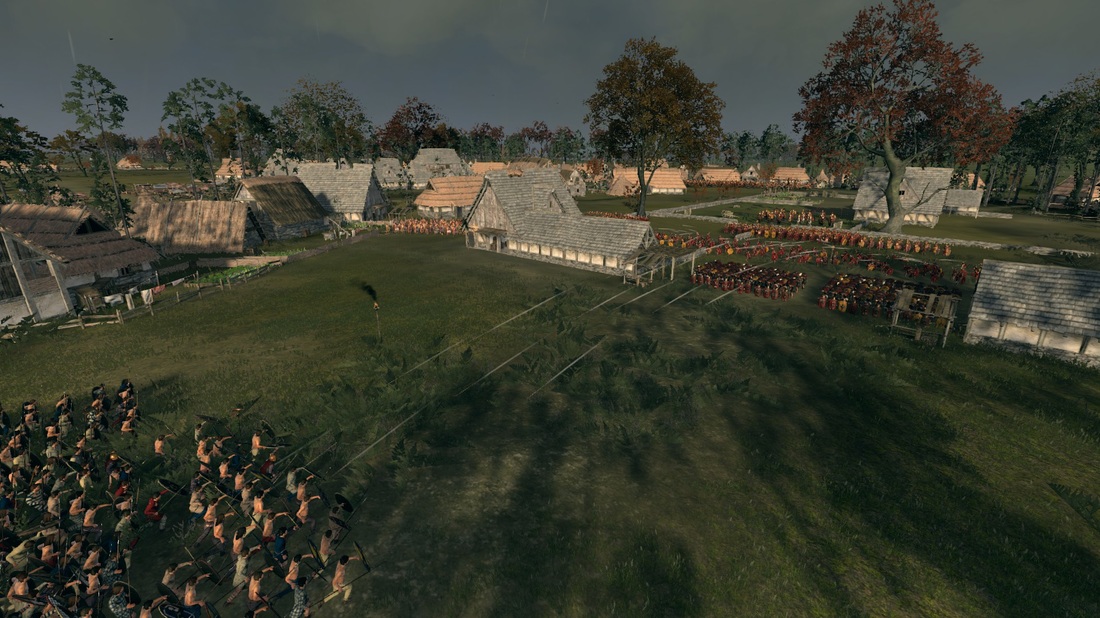 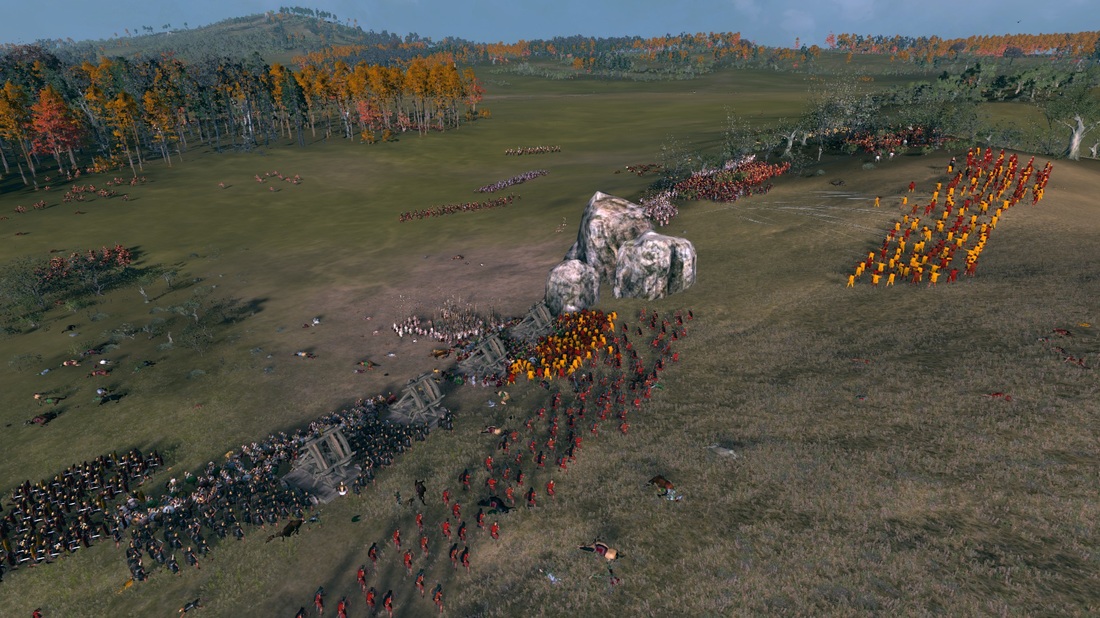 Winter 102 BC – While the Roman supported tribes of the Frisii and Rugii continued to war with what remained of the Gallic confederation the XVI Legion sailed from the northern coast to bring the first Roman soldiers to Britannia. At the village of Iska, the Iceni were prepared for the invasion, and Commander Publius Lollius Silanus found a vast barbarian host arrayed on the shore to meet his legion and the XVII Fleet. Declining the cautious approach, Silanus launched a bold assault on the village and earned an unlikely victory for the Republic. The battle badly maimed the legion but the Iceni resistance was seemingly demolished, and British envoys soon arrived with offers of peace. With his army thoroughly battered and reinforcements far away, Silanus accepted the offer and began to fortify the new Roman foothold on the island. 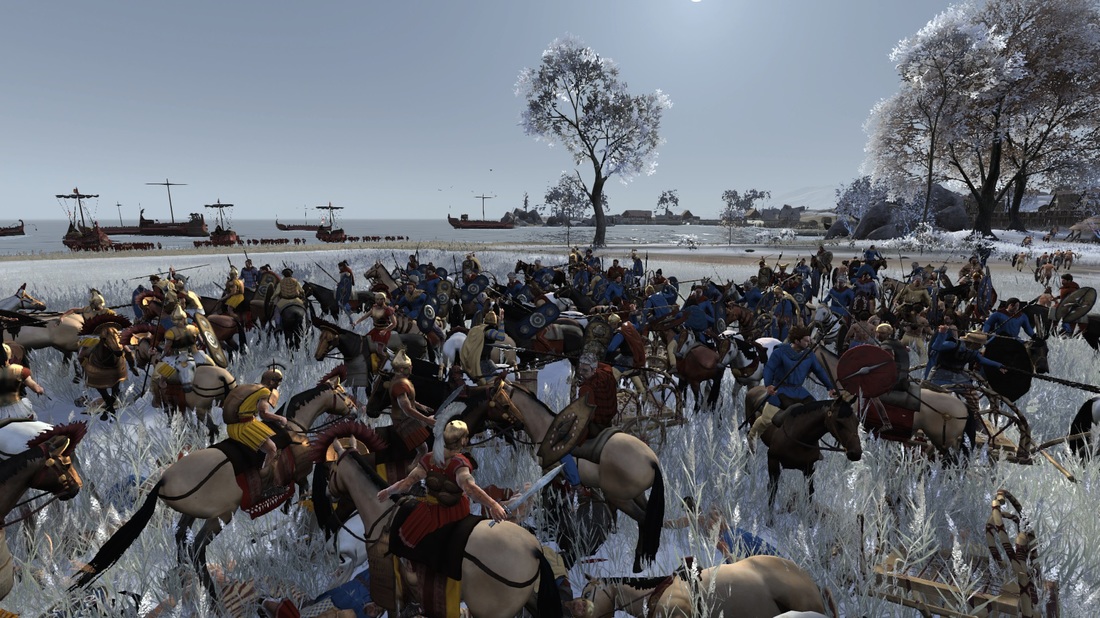 Spring 101 BC- The Arevaci, an Iberian tribe and continuous thorn in the side of Roman governance in Hispania, shook the Republic with a surprise assault on the city of Qart Hadasht. After scaling the walls of the port city and killing its few Roman guardians, their motivations became known when a new Punic leadership council was announced. To the horror of Hispania’s Roman citizens, the council called itself Nova Carthago, and laid claim to the old Carthaginian Empire. These rebels, descendants of Rome’s old foes in the Punic Wars, and their barbarian allies looked to be a dire threat to the Republic’s dominance in Hispania. 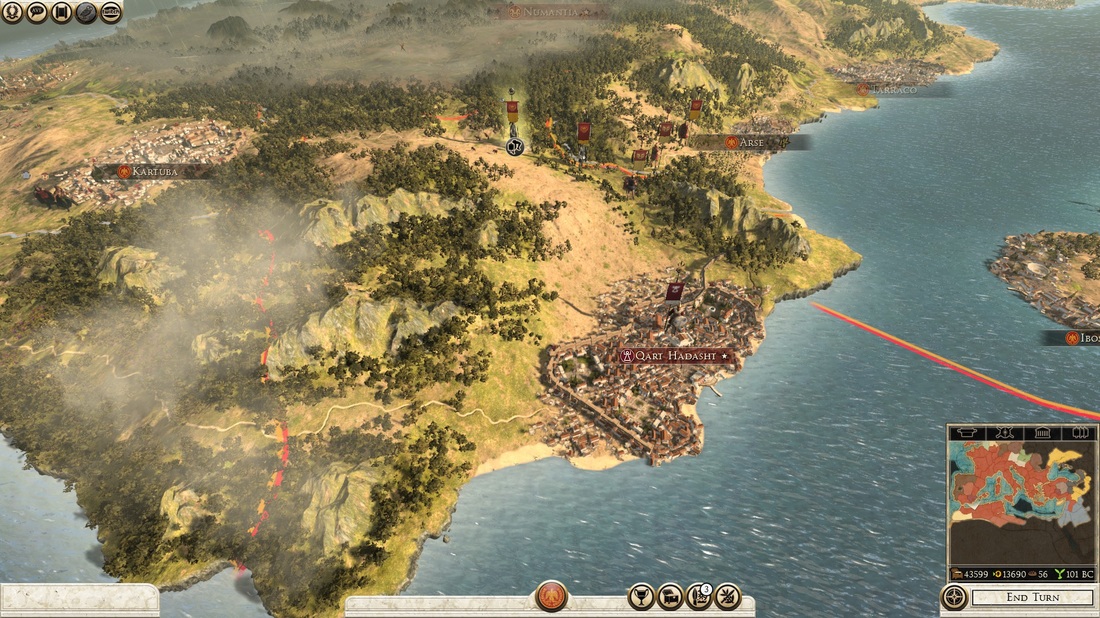 Summer 100 BC – The Arevaci horde descended on Arse where it met the XII Legion on the road. The poorly organized Iberian warbands were luckily separated and defeated piecemeal by Commander Curtius Volusus, but the Roman general was apparently unable to learn from the mistakes of his predecessors and fell fighting the enemy cavalry in a dense wood. His name joined the rapidly growing list of XII Legion commanders who had bravely fallen in battle. Without the protection of the barbarian army, the threat of Nova Carthago proved shallow. Within the year, and to the great relief of the Senate, the VIII Legion had reoccupied the city and executed the rebels. 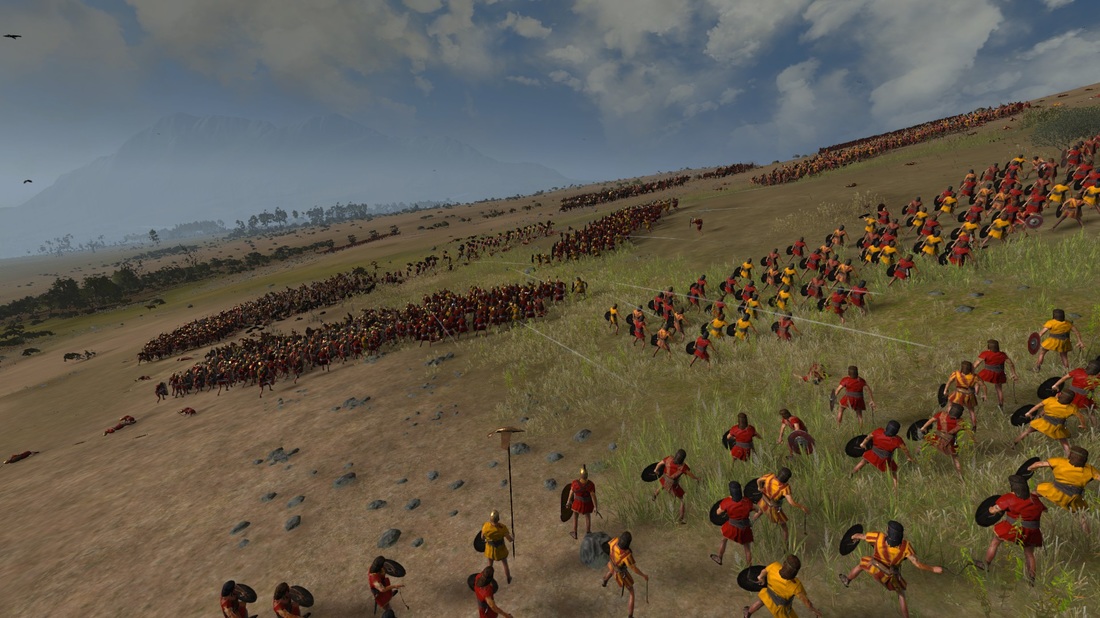 Spring 97 BC – With the exceptions of the friendly Brueci and Boii tribes of Pannonia, the Danube River had served as the boundary between the Republic and the uncivilized realm of the Germans. Both sides had seemed content with this arrangement for more than a generation, but the Roman citizens of the frontier had always kept one eye watching the opposite bank. In 97 BC, a political dispute in Belgica obliterated this balance and blood was shed in great quantities all along the river for many years after.
​
The Rugii, a German tribe allied with Rome in the Gallic war, had assisted the I Legion in capturing the town of Nemetocenna in northern Gallia, but the Germanic warlord, Anselm, refused to turn the town over to the Roman general, Terentius Albus, after the battle. Anselm claimed Nemetocenna and the surrounding territory for the Germans, but Albus knew the Senate expected complete control of the Gallic provinces. Terentius Albus, unwilling to see his Legion and house shamed by these barbarians, summarily ended the non-aggression treaty with the Rugii and besieged the town and its new occupants. Unfortunately for the Republic, the Rugii had close ties with, and were supported by, the powerful Suebi tribe. By the next season, Suebi warbands had crossed the Danube in two places to battle Roman legions, and the legions responded by raiding the Germanic countryside. The conflict with the Suebi would fall primarily on the shoulders of the V Legion, stationed in Thracia, and the XIV Legion, garrisoned at Singidun. 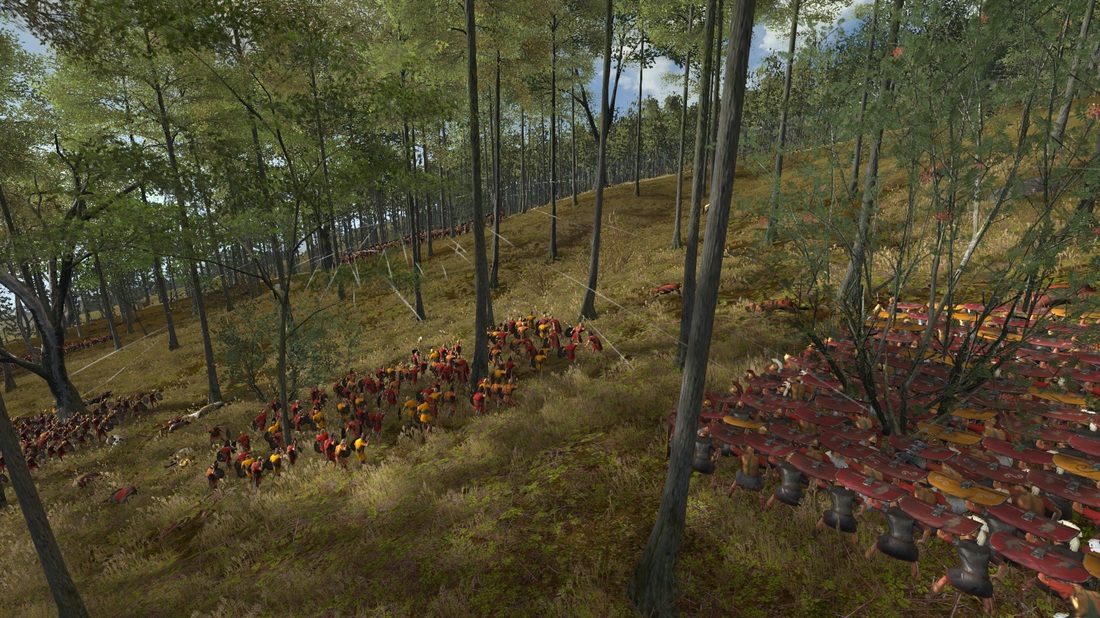 Summer 96 BC – Far in the north, Commander Lollius Silanus led his intrepid legion back out to sea. He had made peace with the Iceni tribe, but Silanus knew of a weaker tribe, called the Ebdani, that ruled the nearby island of Hibernia. Supported by the III and VI Fleets, the charismatic general from the Junii family landed near Eblana and recruited many of the Ebdani’s local enemies into his army with promises of a new order for the island. The Ebdani saw the invasion for what it was and quickly brought their warriors to bare, but Silanus destroyed them outside of Eblana. Using the town as his new base, Silanus began the work of pacifying the population under Roman rule and planning the next step in the conquest of Brittania.
​
In the same year, Nemetocenna capitulated to the I Legion and its Rugii defenders were placed in chains, while the leaders of the Nervii, the last claimants to Gallic hegemony, were cornered and routed at Bagacum by the IV and XIX Legions. Although the frontiers were still afire and the Gallic population was far from quiescent, the conquest of Gaul was deemed complete and the Roman people exhibited their pride with a great triumph in the capital. The many commanders of the northern legions and fleets were celebrated by patrician and plebian alike, and most could not help but notice that the House of Julii seemed to be well represented among their ranks. 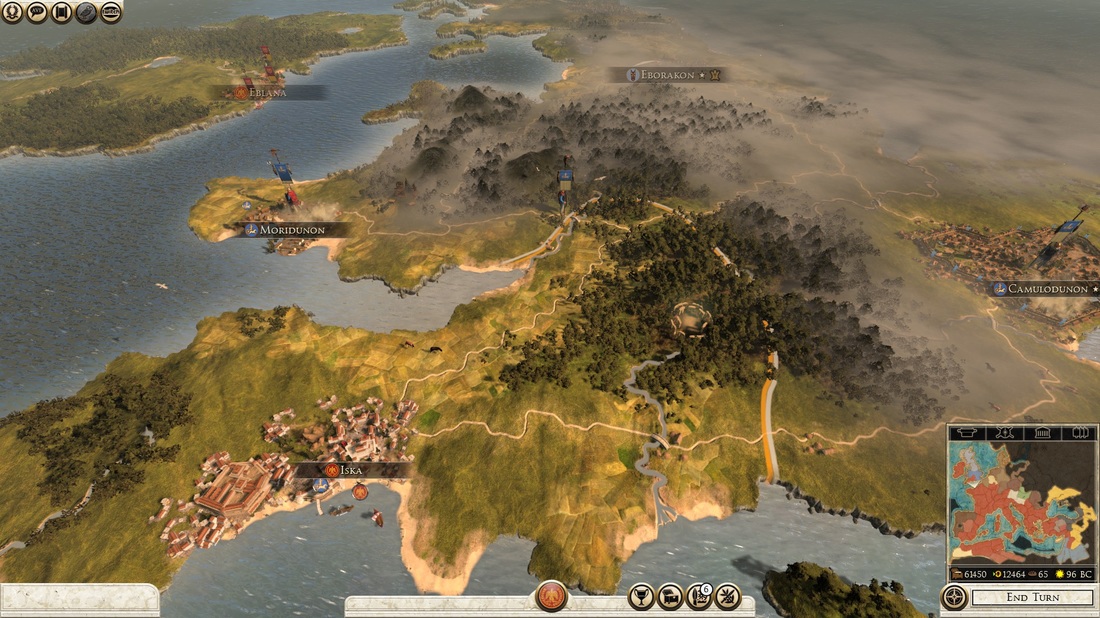 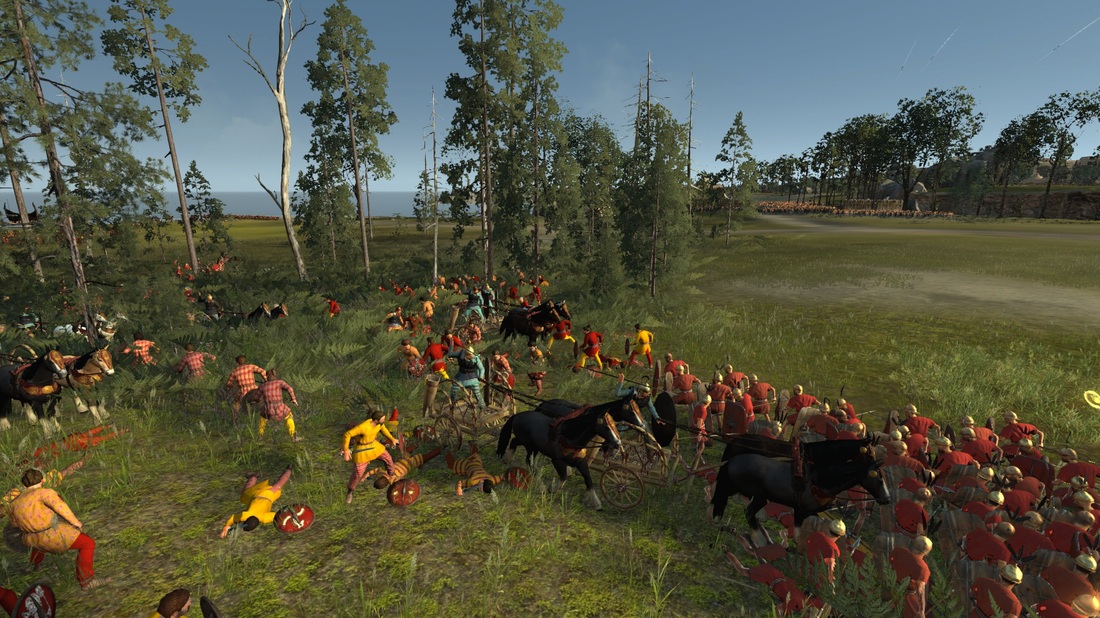 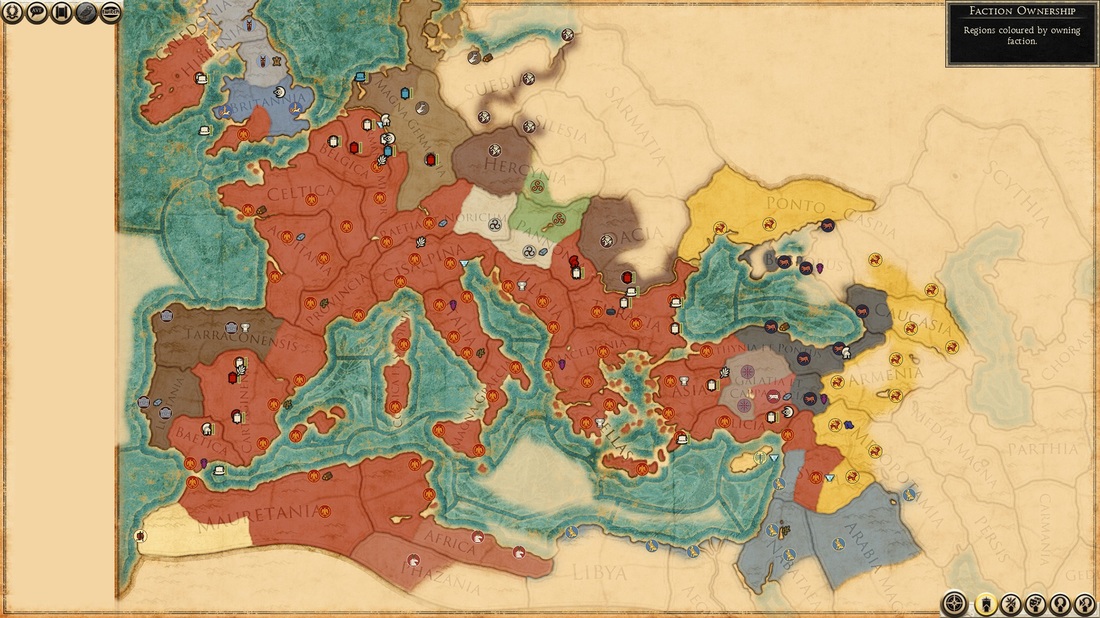