4. Dynasty Patriarch/Matriarch - Rules for switching characters within your dynasty.
The character controlled by each player will be considered the Patriarch of their dynasty. At the start of any session or rehost, a player may choose to control any member of his dynasty instead of the character he ended as on that save point, therefore changing his Patriarch. Any player knocked out of the game may rejoin at the next rehost opportunity as any member of their dynasty.

5. Home Duchies - Protection rules to maintain the power base of every player (Reduced from last campaign due to smaller play area).
The first Duchy title acquired by any member of a player's dynasty will be designated as that dynasty's Home Duchy. This Duchy title, as well the player's two starting county titles, may not be contested by war, revoked, or usurped (even through peaceful usurpation) by another player as long as they are held by a member of the player's Dynasty. This protection does not apply against any AI and players are free to participate however they like in wars instigated by the AI, no matter what titles may be targeted in the war. Protected titles can still be lost to other players through inheritance or other actions of the AI. If a player suspects that another player is violating these rules, pause the game to allow for inspection, and offending players will be required to concede defeat of any wars. Note that the Prepared Invasion casus belli takes all titles that are occupied without directly contesting these titles, so the invader using this casus belli will be restricted from occupying the two starting counties of any other player.

6. Dynasty Reset - Restart rules. Hopefully you will not need these.
At the end of any session, a player may ask to have his Dynasty 'reset' to his his starting provinces: All landed members of the Dynasty will give up their titles to a randomly created courtier and the youngest living member of the Dynasty will be given the initial starting Dynasty titles, no matter their current owners. The titles will remain in vassalage within their current feudal hierarchy, favoring the primary title.

7. Player Tiers - There are no tiers this campaign and score ranking will be in a single group, however there are separate title rewards reserved for the top scores of each starting dynasty group.

8. Gaming Logisitics - Game Speed and Rehosts.
- Game will run at speed 2.
- As long as overall network stability is good, and no more than one player suffers a crash or de-sync at a time, rehosts will be scheduled at and limited to 8:00 and  9:00 pm EST to pick up late or dropped players. If you do not make it before the game starts at 7:00, make sure you let the host know that you will be available for the next rehost.
Scoring
Interval Scoring
These points can be gained during scoring that will take place at 800 AD and every 25 years afterword. The game will end at 1000 AD.
- Score gained at 900, 925, 950, 975 will be multiplied by 2.
- Score gained at 1000 will be multiplied by 3.

1. Influence - Players gain 10 points per duchy title within de jure Britannia held by any member of their dynasty.
Advice: Get as many duchy titles for your dynasty as you can in Britannia. Titles outside of Britannia can still be valuable for levies and taxes, but will be worth no points.

2. Leadership - Any member of a player's dynasty with a kingdom title, does not gain points for duchy titles held by himself or dynasty members within that kingdom, but will instead gain 10 points for every duchy title that is de facto part of that kingdom and not held by another player's dynasty. Any duchy titles outside of de jure Britannia are ignored.
Advice: Becoming a king is very rewarding, and easier if you work with other players, but if you work with others you will have to share the rewards.
​
3. Council - A Patriarch who is a council member of any kingdom or empire will gain 20 points for his dynasty, and a Patriarch with a kingdom or empire title will gain 10 points for each other player's Patriarch on his council (including the Advisor position). Patriarchs will also gain (or lose) points equal to the relations effect of any minor titles they hold within a king's court.
Advice: Kings can use council membership to reward helpful vassals while also usually keeping them out of troublesome factions, but the players will get to vote on some of your actions, and even the council can join factions if you choose to go against their votes, or when a new heir has recently taken the throne. Vassal players will have to choose if they think participating in the council is worth losing the ability to join factions. Minor titles, however, are rewards the king can hand out with relatively free strings attached.

4. High King of Britain - Points from Influence, Leadership, and Council are doubled for all titles that are de facto part of the largest kingdom in Britannia (determined by the largest number of de facto duchy titles, counting only duchy titles within Britannia). However, Influence and Council points will not be doubled if the religion of the title or position holder does not match the religion of the kingdom's ruler even if their titles are within the largest kingdom.
Advice: You can double your score by joining the greatest kingdom, but is it worth it if others are benefiting from it more than you? Is your king sharing the glory? If you disagree with your share of the score, consider leaving the kingdom and joining with others to form a better realm or joining a faction to reign in the king's power and redistribute some points. Also a heretic, pagan, or convert king could hamper your score if you do not choose to follow suit.

5. King of the Norse! - Any dynasty of the Germanic religion group will gain 50 points if any of its members holds the title of the kingdom of Norway.
​Advice: This is the only source of points for the Vikings outside of Britannia. Glory lies across the waves, but there is still something to fight or negotiate about at home.

6. Guardians/Wardens of the Old Gods - A dynasty gains 20 points for any county title they hold that contains a Germanic Holy Site. Additionally, all dynasties gain 10 points for every Germanic Holy Site controlled by any member of their religious group (This means that the Norse will be gaining 40 points each and the Catholics will be gaining 10 points each if nothing changes from the start).
Advice: One Holy Site county title is worth the same as two Britannian duchies! This could lead the Norse to fighting/bartering over who controls the Scandinavian Holy Sites, working together to protect or take back the southern sites, or even give incentive for an unlikely British invasion of Scandinavia. Either way, helping your faith holds as many as possible is always a good idea.
​
Immediate Scoring
These points can be gained immediately upon completing the described goal. Please pause the game and alert the host if needed.

7. Founding - Any Patriarch who creates a kingdom title within Britannia will gain 100 points, the first player Patriarch to create a kingdom in Britannia will instead gain 200 points. A dynasty can only claim points from Founding once.
Advice: Independence is generally great, but it may exclude you from being part of the largest kingdom.

8. Conquest - Any Patriarch of the Germanic religion group who usurps a kingdom title of Britannia held by another player will gain 100 points. The first Patriarch to claim a Conquest reward will instead earn 200 points. A dynasty can only claim the conquest reward for a specific title once. All Conquest point values after 900 AD will be multiplied by 2.
Advice: Reserved for the Germanic invaders to compensate for their initial score disadvantage, great rewards go to those whose ambitions change the map of Britain.

9. Intrigue - Any war or in-game demand that deposes a reigning king of a player's dynasty (or causes them to abdicate) will gain 50 points for the dynasties of any Patriarchs who initiated the war or demands, were members of the faction involved when demands are made, or joined the rebellious side in any related war (including Patriarchs from outside the kingdom, although any Patriarch who also has a kingdom title is excluded from gaining these points). This will also deduct 50 points from the dynasty of the king and deduct 20 points from the dynasty of any loyalist Patriarchs within the kingdom. A Patriarch is considered a loyalist if they were not a member of the related faction, were not an allied participant of the rebels during the related war, and does not have an alliance with the war-leader or demand issuer at the time of abdication (regardless of ability to participate in any related war). If Intrigue points are claimed by placing a new ruler on the throne of a kingdom, Patriarchs in that kingdom cannot gain or lose points from Intrigue for the next 10 years after crowning the new king, otherwise the only restrictions are from truce timers. A faction that successfully increases Council Power against a king of a player's dynasty, through demands or war, will award and deduct points in the same way. All Intrigue point values after 900 AD will be multiplied by 2.
Advice: A king can easily be overwhelmed by a few unruly vassals, so don't hesitate to milk these points out of your liege if he is being stingy with the titles, but loyalists can also meddle on the king's behalf for the right promises, since their armies will always be hostile to rebel armies, even if they are not directly allied to the king.

Clarifications
- Rebellion titles are ignored for scoring purposes and all titles involved in rebellions are still considered to be part of the defending ruler's realm.
- Please note the reduced protection for Home Duchies in the Campaign Rules above with special rules for Prepared Invasions.

Houses of the old gods 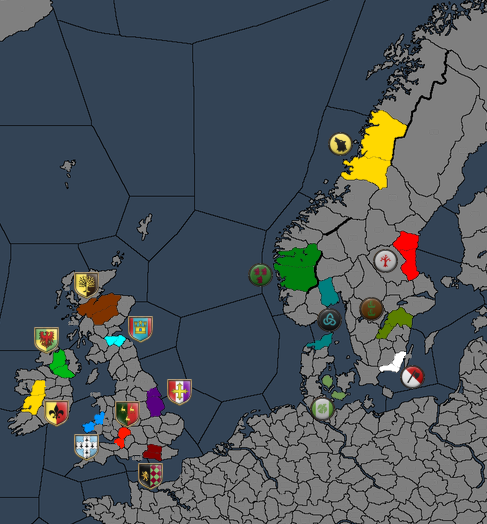 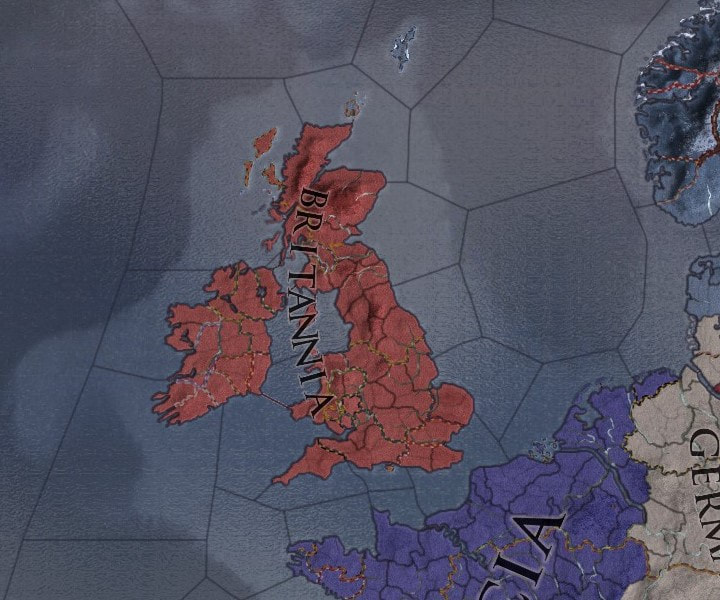 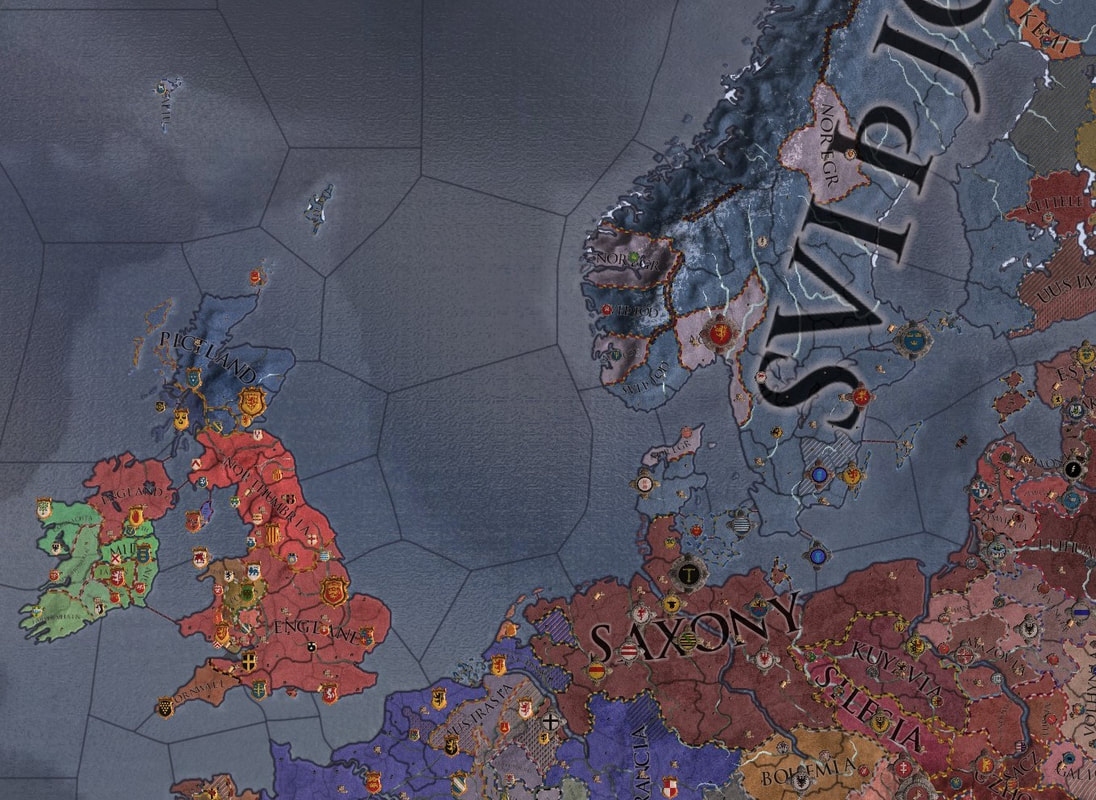 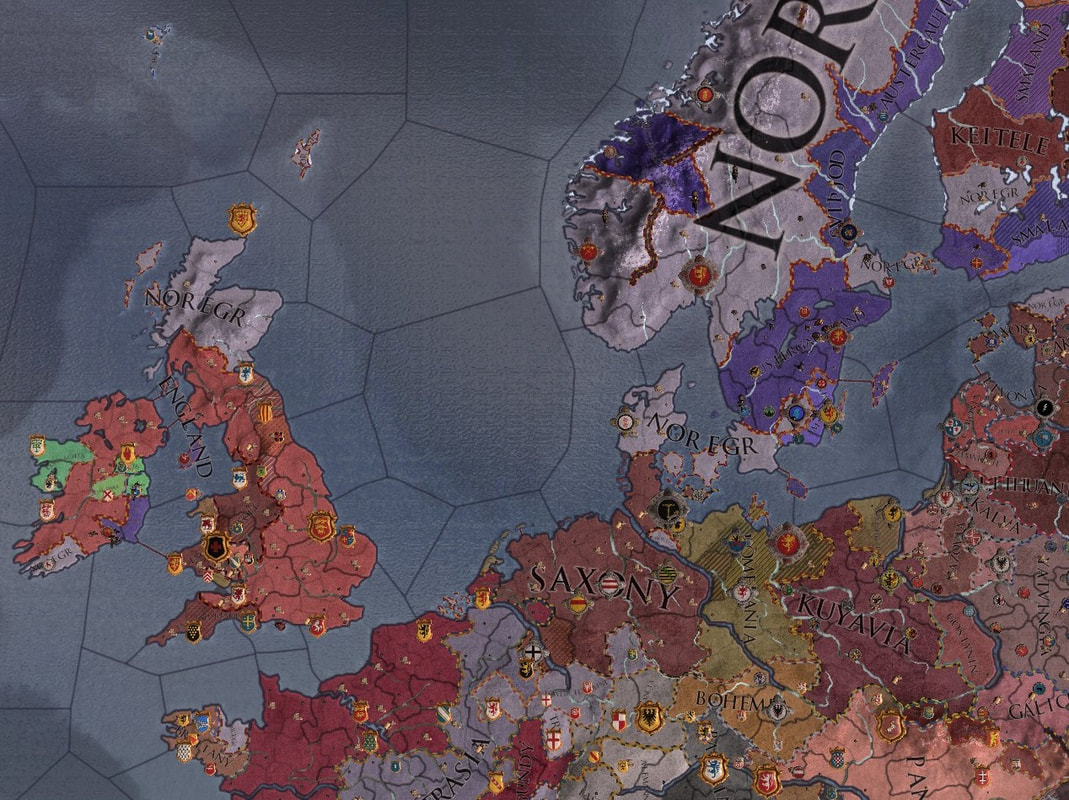 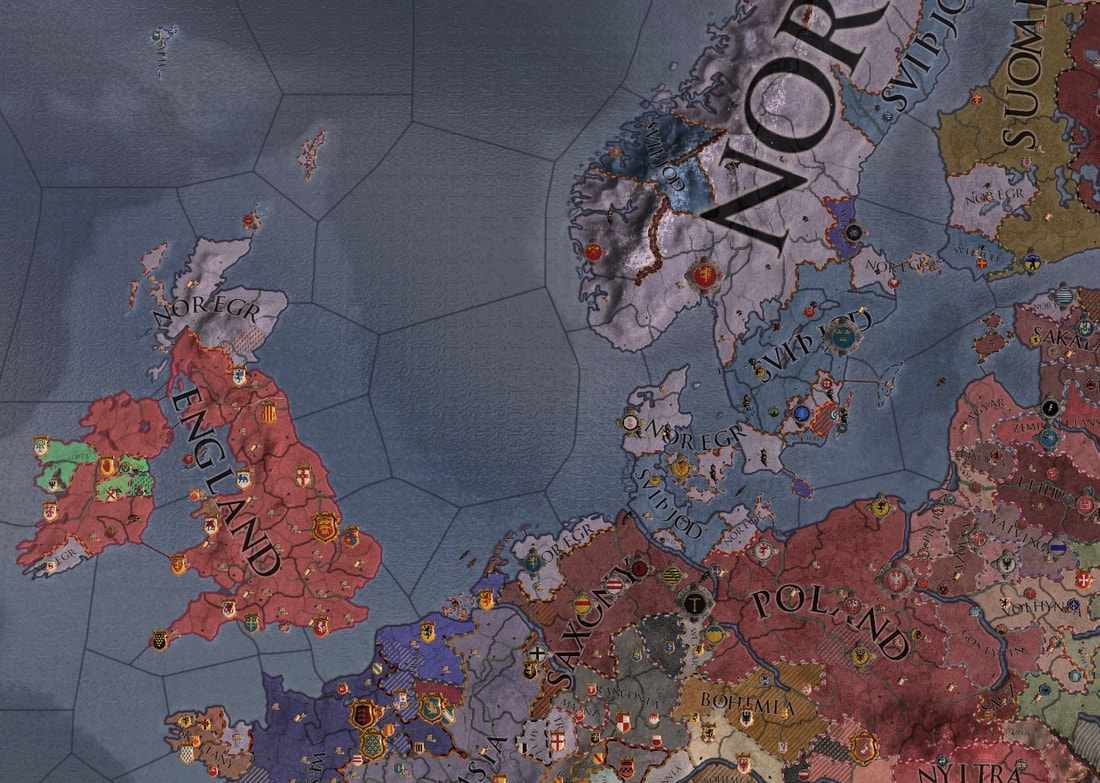 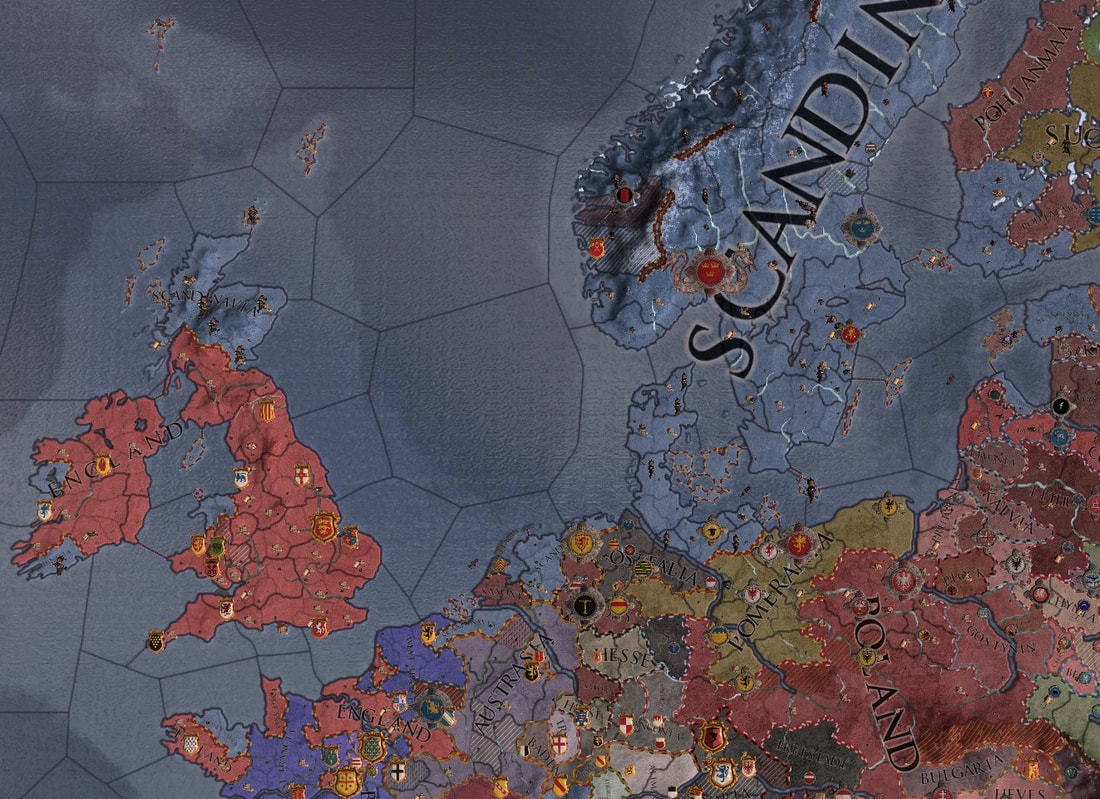 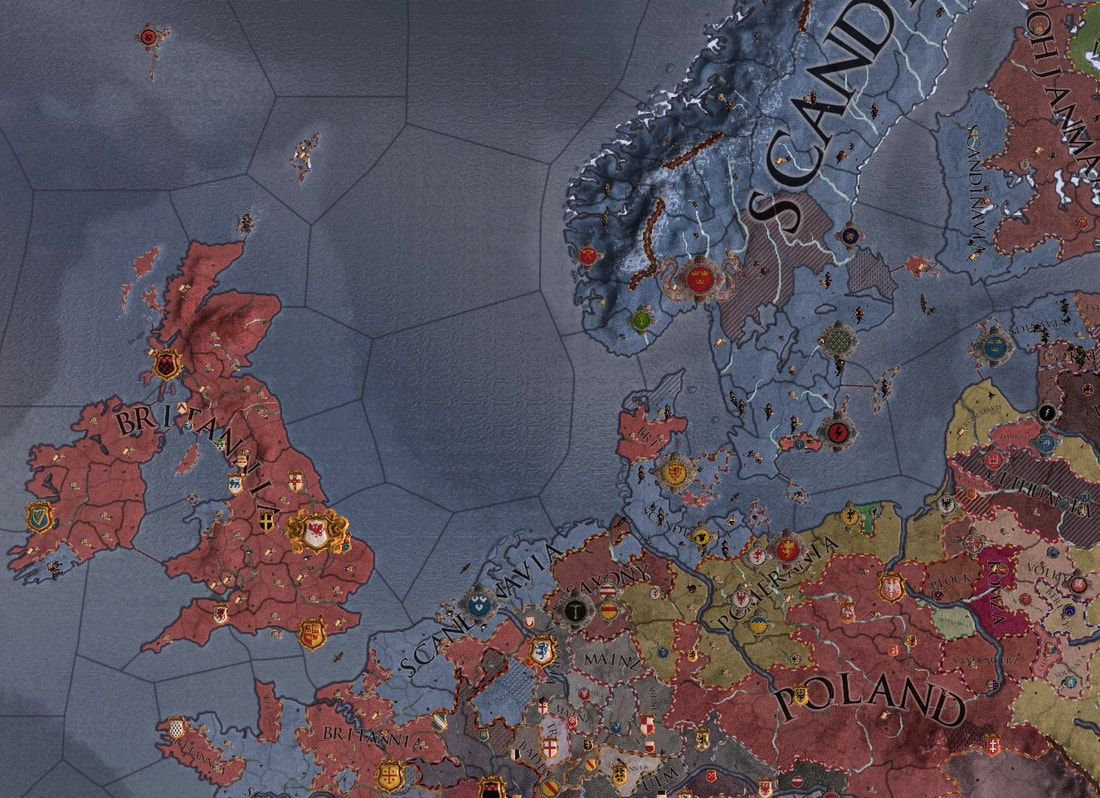 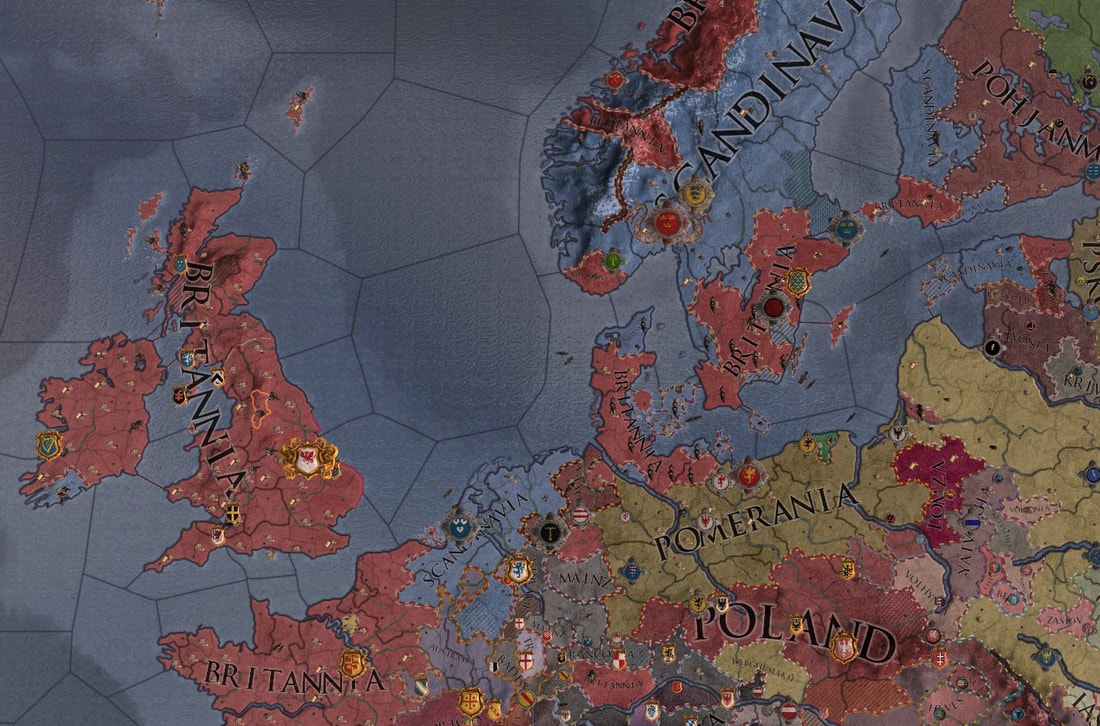 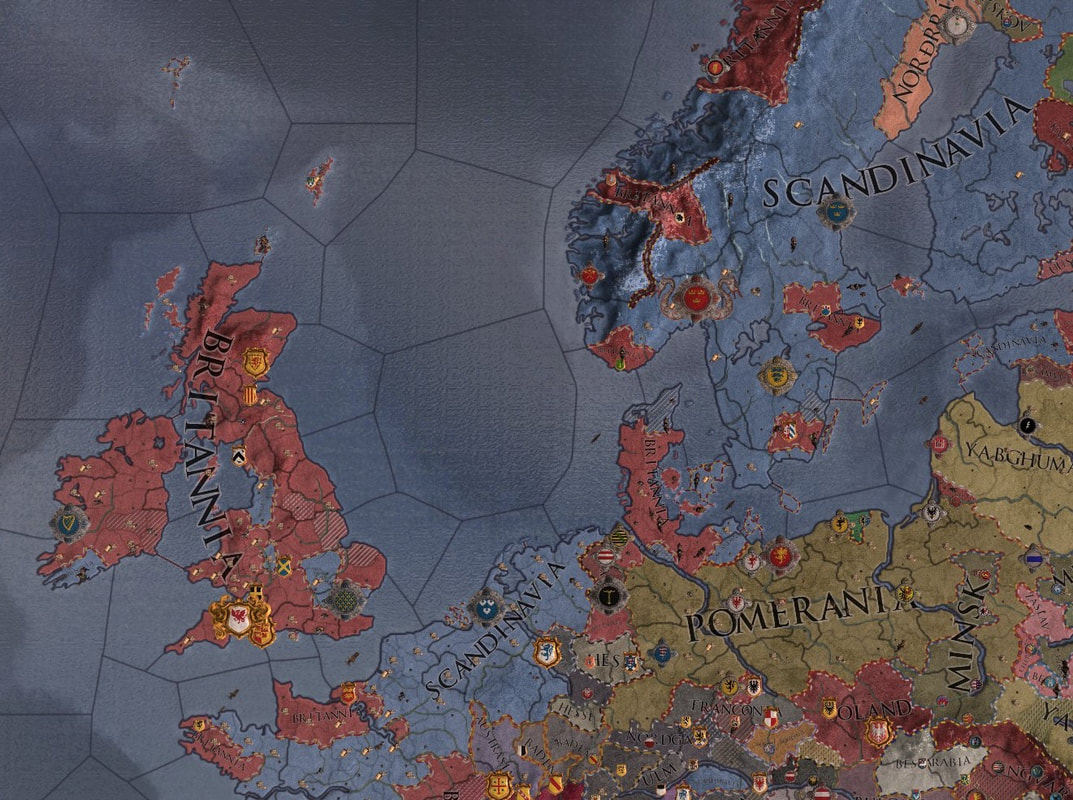 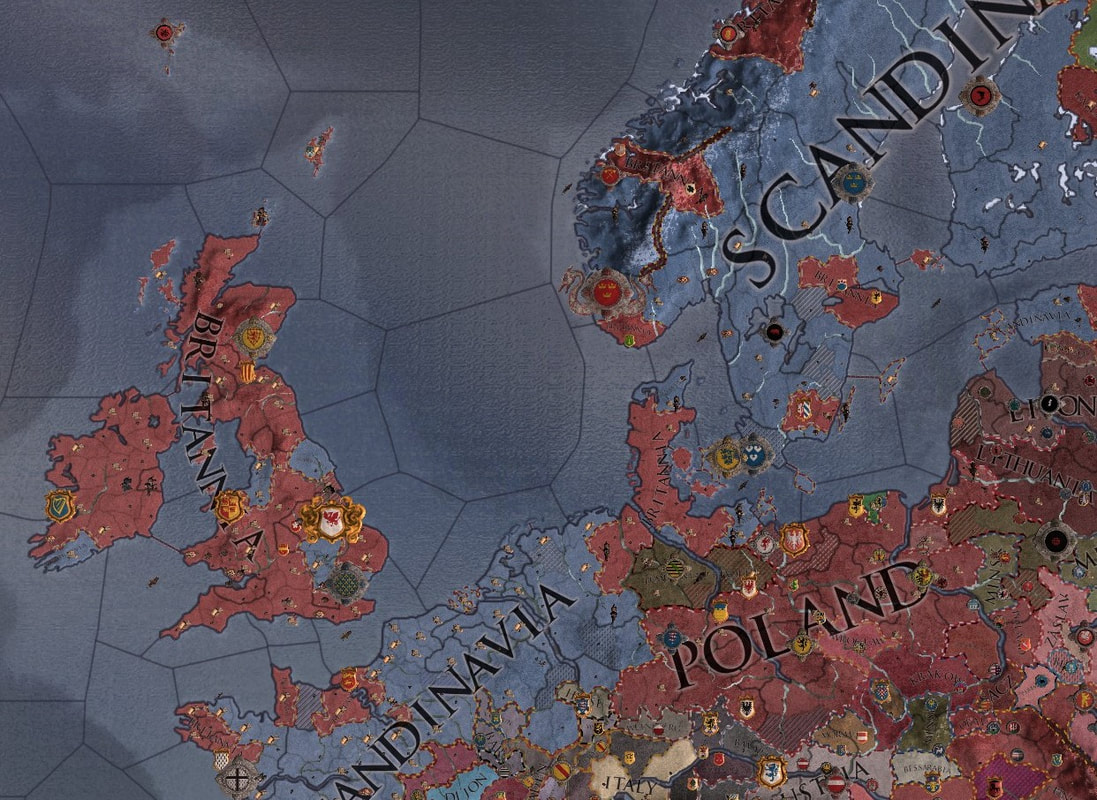