the Mandate of Heaven - Starting Conditions

This campaign will focus on the monolithic Chinese empire and its influence over East Asia. Participants will control major Asian nations of the era, all dwarfed by the vast realm of the Ming dynasty in the east and the great horde of the Timurids in the west. The Mandate of Heaven is held by the Ming dynasty, but any nation that chooses to follow an eastern religion may challenge the Ming for the Mandate, and deteriorating the reigning emperor's hold on the title relies upon defying his demands for tribute. In Japan, the feudal daimyos fight over control of the shogunate, but those who can consolidate power on the islands will be able to tap their strong military traditions to launch towards greater conquests. The rulers of India remain aloof from these particular struggles, but lacking these ancient power structures only ensures perpetual conflict and chaos in the realms south of the Himalayas.

- Victory cards are active in order to encourage realistic "shifting alliances" and other Machiavellian backstabbery, and to penalize being inordinately friendly with those you share a border with. Victory cards will only appear for a player if they reach at least 300 total development. If the territory dictated by a card is captured it will reward the player with an immediate boost in points (1000, 2000, 3000, or 4000 points) and provide 1 additional point per month it is held. Inversely, if a player's victory card includes land formerly controlled by another player, the previous owner will receive a negative modifier equal to half the value of the victory card and will have 1 point deducted from their score per month that the victory card is held. Therefore every player's top priorities should be to ensure that no victory cards are taken from their own territory, followed by capturing as many victory cards as possible and denying all cards to other players. Victory cards that appear on protected areas will be randomly reassigned at the end of the session.

- Players may not annex, or directly cause the annexation of, any of the provinces owned by another player in the area of that player's capital, in any treaty they control, nor can they cause the release of a nation in any player's capital area in any treaty they control. Players may vassalize or otherwise subjugate a player, but may not diplomatically annex. A player's protected area will never change except when the capital is moved by a National Decision, and only if it would not cause an overlap with another player's capital area. Should a player change nations or fail to return to the game, the starting area of the player's abandoned nation will remain protected in this way and will never be available for annexation.

- During their first missed session, other players may not attack the absent player's nation, and may not demand any peace terms from their nation if they find themselves at war by other means. Absent players' nations are not protected in further missed sessions and players cannot take advantage of protection after the year 1750 regardless.
If a war continues into a player's protected session, his enemies may only demand the ceding/release of land they occupied at the start of the protected session, war reparations, gold, and/or humiliation.

- If a player is eliminated by the AI he may take over any unclaimed nation from the selection pool, any Daimyo that does not share a capital area with another player, Kyoto, or Musashi, any sub-Saharan African nation, eternal and glorious Leinster, or any nation in the New World excluding colonial nations.
​
- A player may use the vassal or colonial nation release mechanics to switch to playing a released subject. Similarly, a player may switch to playing one of their subject colonial nations or a vassal at the start of a session. This decision will likely change the player's capital area, and cannot be taken if it would cause any overlap with another player's capital area. This decision cannot be reversed.

Rewards:
- The top score from each bracket will receive a (likely alcohol-containing) prize.
- A player who changes nations will not remain in his bracket unless the new nation was one of the player's vassals or colonial nations. Changing to any other nation will place the player in the lowest prize bracket.
- Nation selection in a future campaign will go in order of final score ranking in this campaign, except those who received prizes will pick last (in order of final score).

The nations available are listed below, in order of most desirable starting conditions within each grouping. Brackets are divided into expected levels of competitiveness and experience. Newer players are suggested to choose lower brackets, as higher brackets will have more competitive and challenging starting positions as well as a more valuable prizes.
The Tributary Kings - Ruling in the shadow of the Celestial Empire, these kings are obliged to pay tribute to the Emperor's authority or risk his wrath. Tributaries enjoy the protection of the Ming dynasty from those who do not pay homage to their Emperor and are also independent to pursue their own conflicts with other tributaries. These benefits often make tributary status more appealing than living in constant fear of the Ming armies. Should the Ming lose the Mandate of Heaven, however, these realms could aspire to rule over the rich lands of China.

The Kingdom of Korea - King Do Yi
- Starting development: 130

The Kingdom of Hsenwi - King Sao Hsam Si-Li Kengtung
- Starting development: 40
The Khans and Kham - While the Ming claim authority over the steppe, the khans do not often submit and are an ever-present threat to Chinese authority. The Yuan dynasty, Mongol rulers of China, has only recently been defeated and overthrown by the Ming, and every Khan dreams of restoring Mongol rule over the Chinese river valleys. From the Roof of the World, the princes of Kham watch the conflicts develop below them and wait for the opportunity to extend their influence.

The Princedom of Kham - Prince Sonam Sangpo Derge
- Starting development: 30
The Rajas and the Sultans - India is fractured and diverse, constantly in flux. Located between Europe and the Far East, with valuable resources easily within reach, the rulers in India have endless opportunities, and foreign powers see this as well. The Timurids are invading the subcontinent from the Northwest, intent on forming an empire to rival those of ancient conquerors, and explorers from far off Europe are beginning to arrive by sea. The Rajas and Sultans of India must fend of these threats as well as each other.

The Sultanate of Oman - Sultan Mahzum Nabhan
- Starting development: 36
The Daimyo - (High Difficulty) The Japanese are ruled by an emperor, but temporal power is primarily invested in the clan that holds the shogunate. The Ashikaga have become complacent and overconfident in their control, and the many daimyo of the land grow bold, seizing land from weaker clans and consolidating power normally spread thin. Soon the Ashikaga will find Kyoto, and their claim on the shogunate, under siege. A shogun that can keep the daimyo in line through diplomacy or violence wields a mighty sword...one that could be used to offer the clans control over foreign land in exchange for their loyalty.

The Daimyo of the Yamana - Lord Mochitoyo Yamana
- Starting development: 29

The Daimyo of the Imagawa - Lord Noritada Imagawa
- Starting development: 11

The Daimyo of the Shimazu - Lord Tadakuni Shimazu
- Starting development: 9

The Daimyo of the Date - Lord Mochimune Date
- Starting development: 9 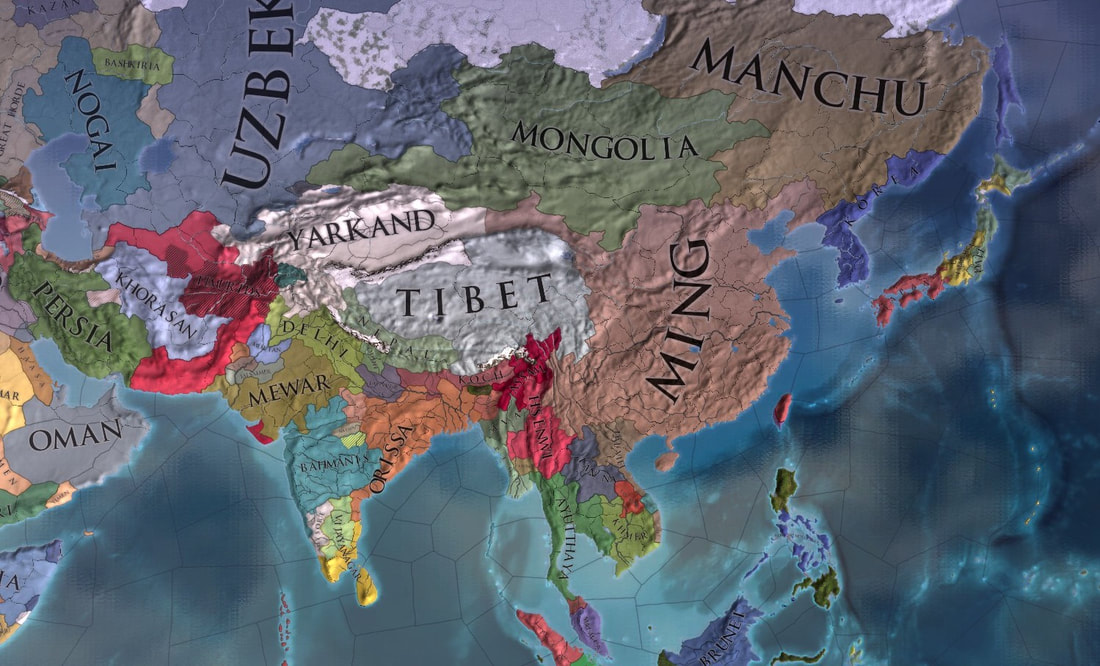 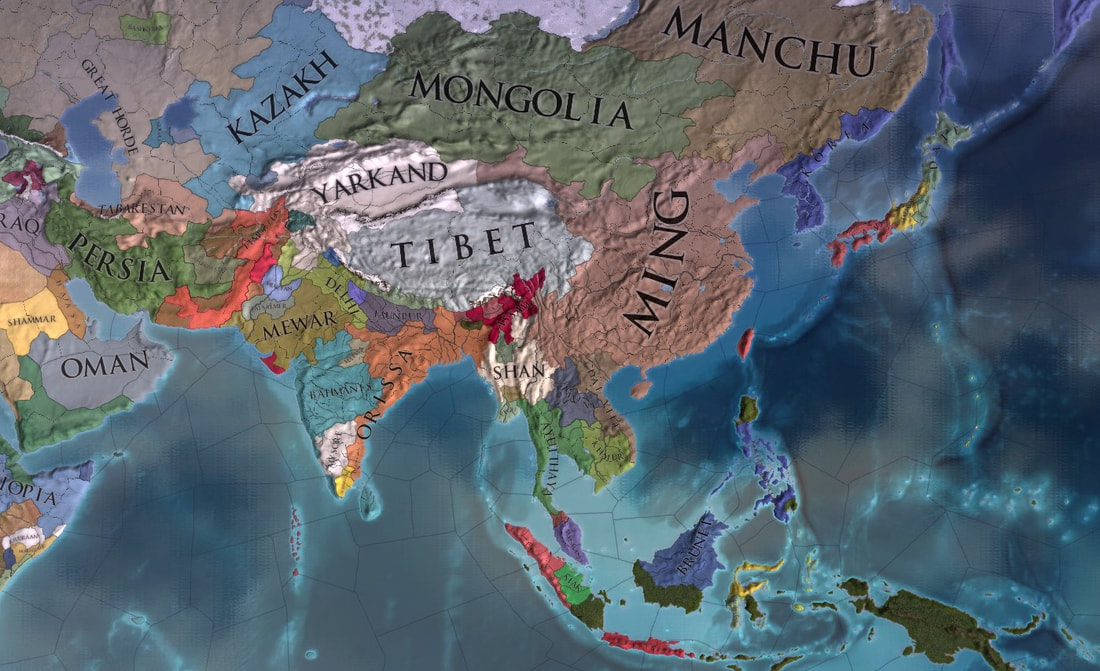 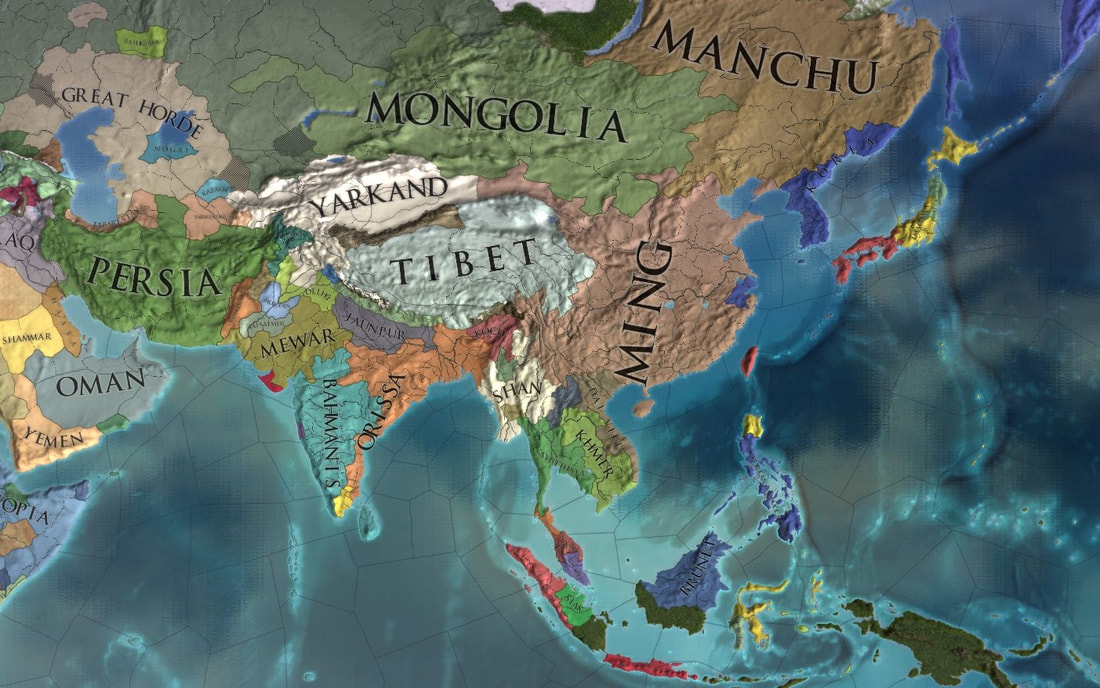 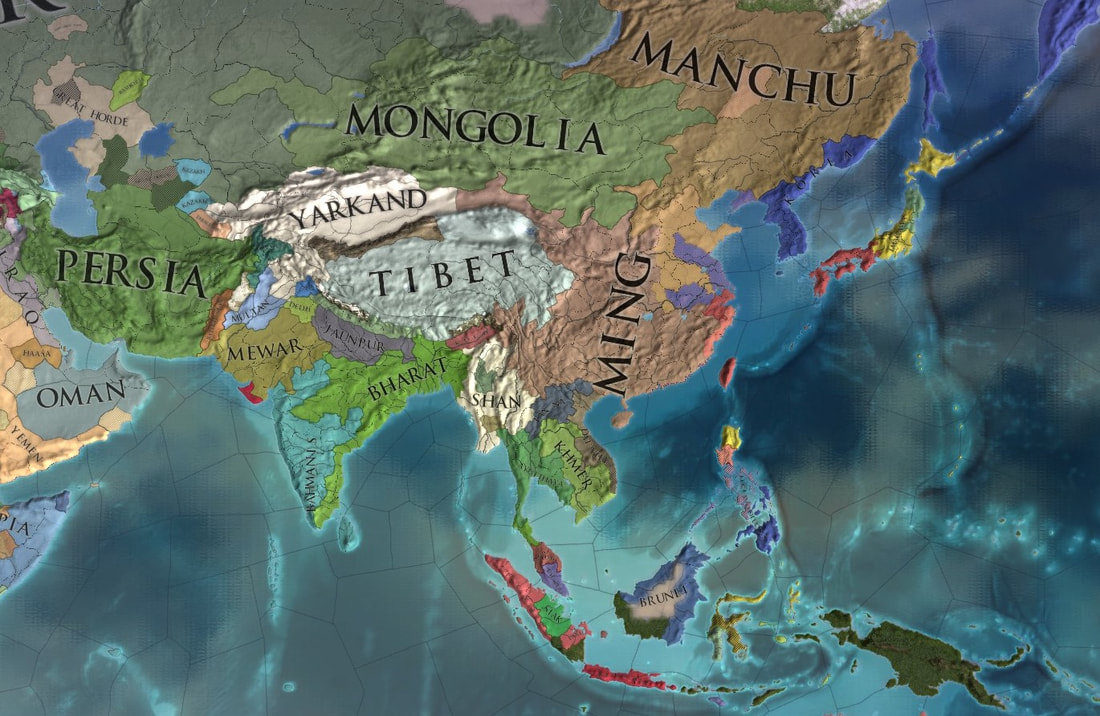 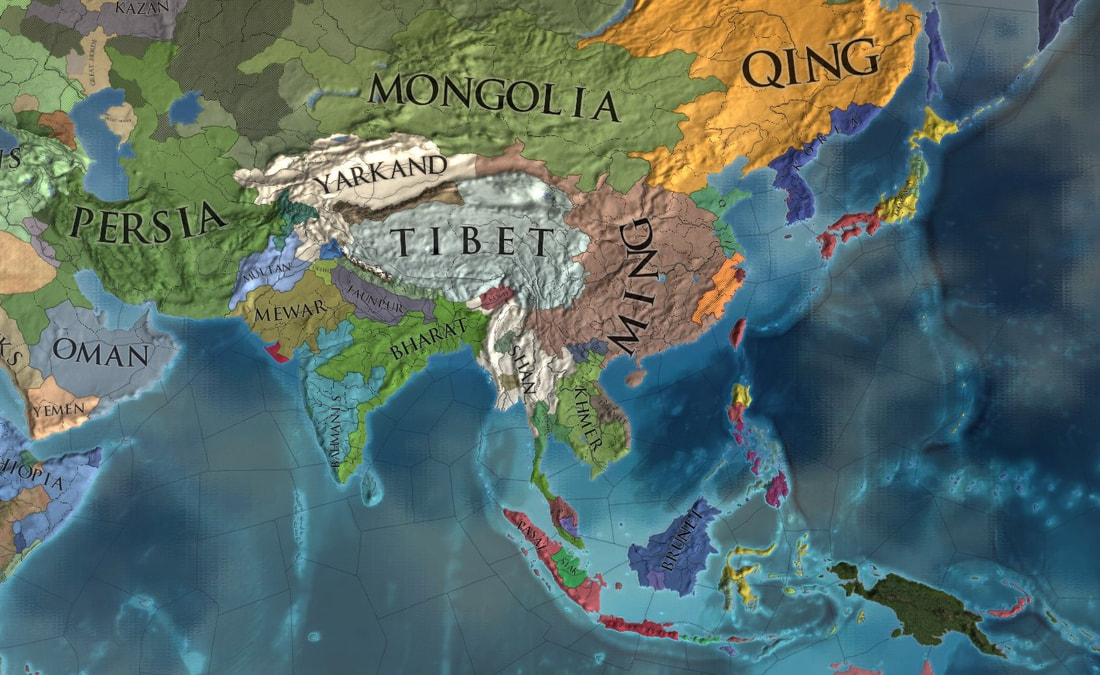 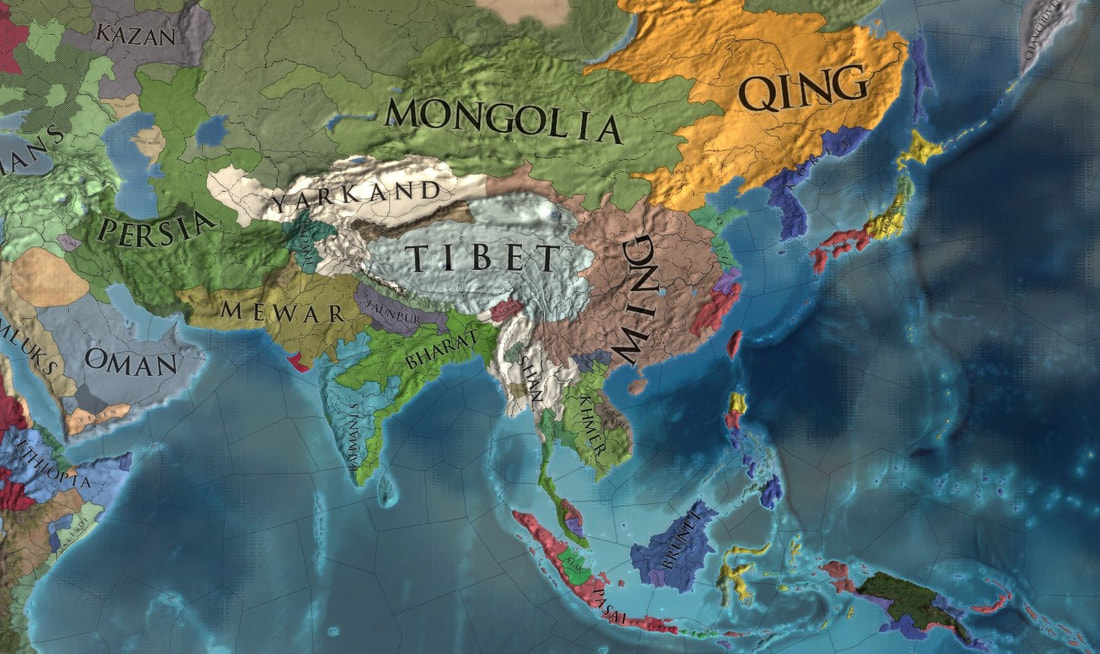 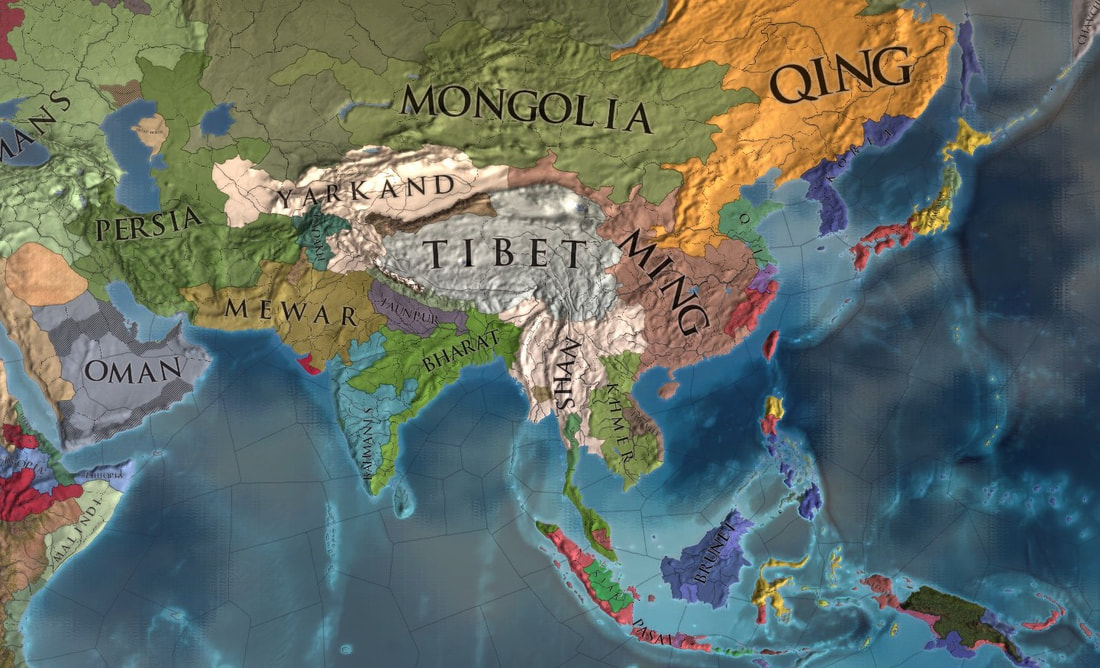 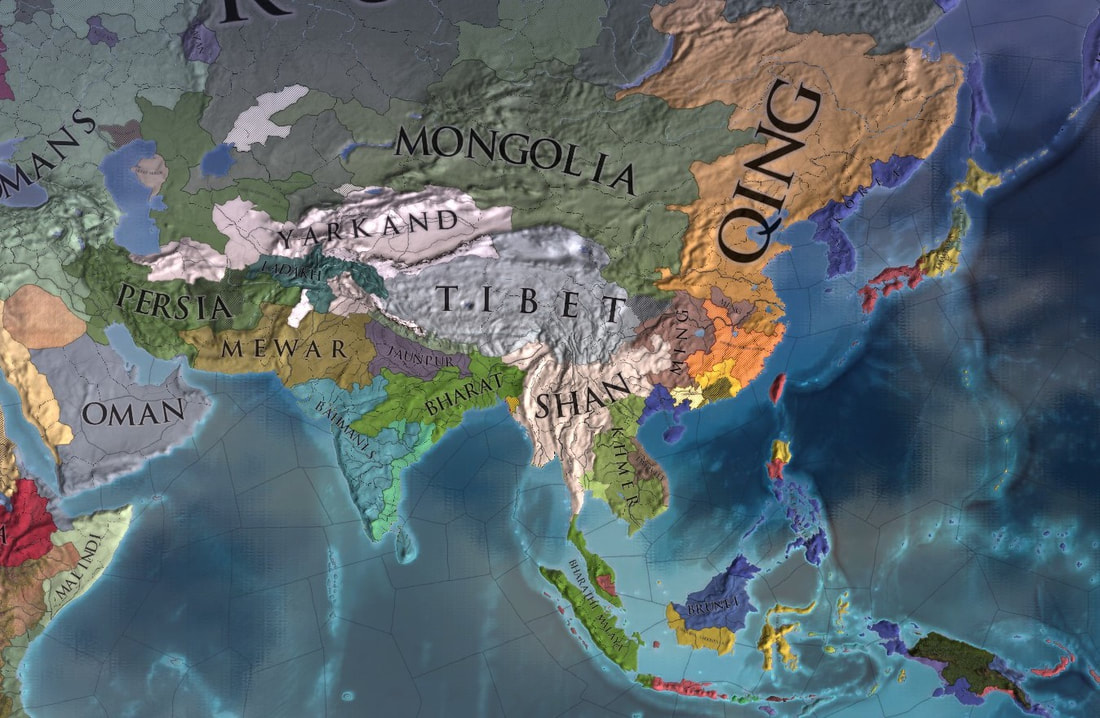 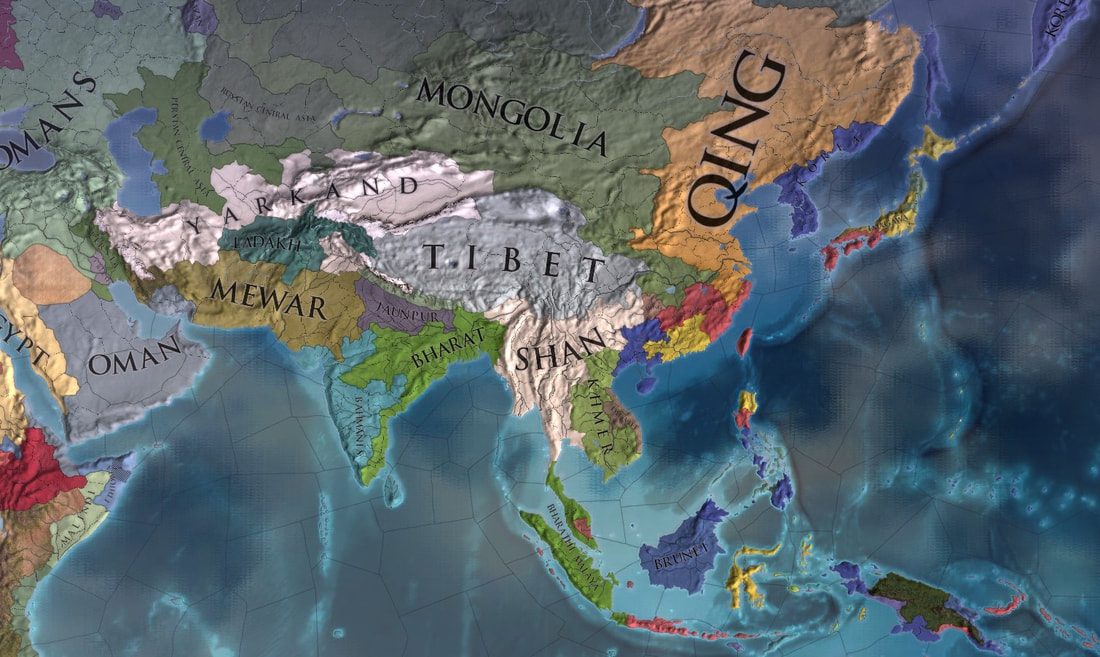 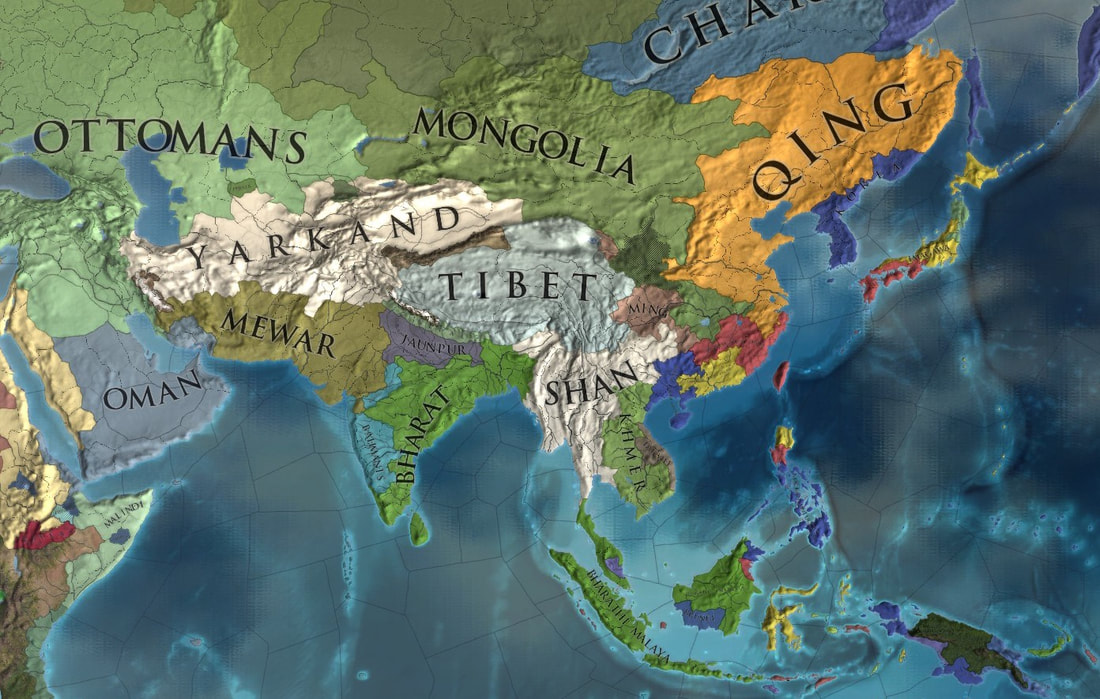 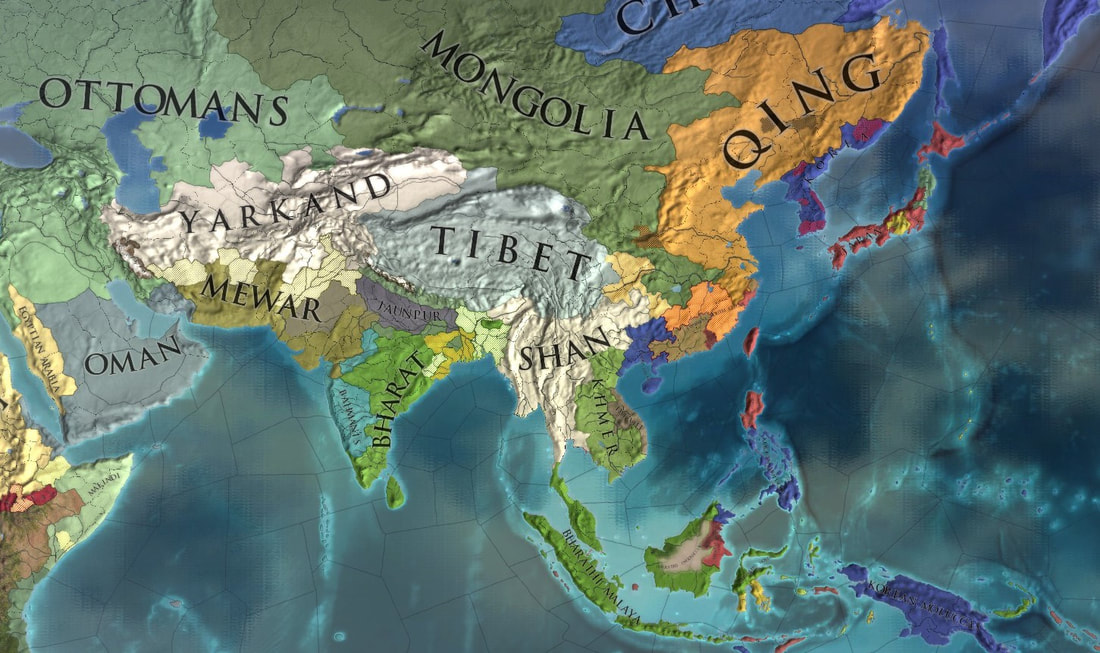 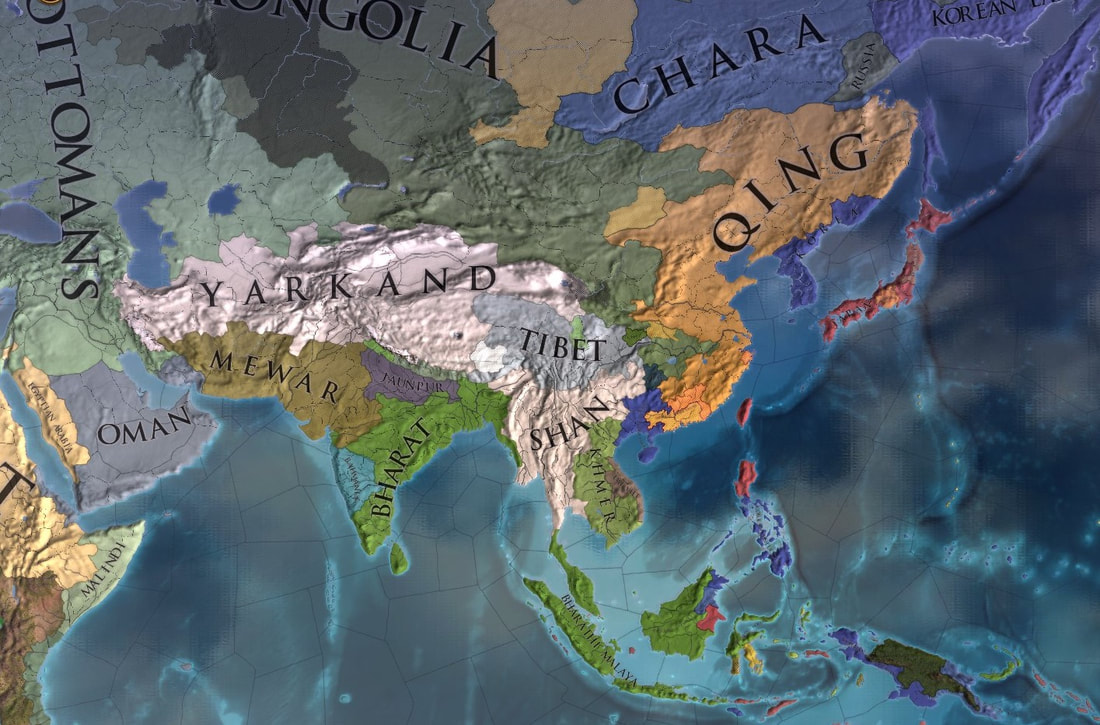