5. Other
Any cosmetic and species options may be chosen as long as they fit within the prerequisites of options already determined above.


Prestige Awards - Accumulated by participating in Gametactica campaigns, Prestige can be "spent" during Nation Selection to allow for certain alternative options or gain a certain bonus. A player can never purchase any of the below benefits more than once during a nation selection session, but may purchase multiple benefits. Prestige can be used in the following ways:

Fiefdoms - 30 Prestige - Declared before empire selection officially begins. Fiefdoms are designed for players who are introducing another player to the game or to Gametactica and wish to start on a "team" with them in a nearby location. The player spending the prestige and any other player of his choice (with their permission) will automatically be assigned the Imperial Fiefdom Origin and will therefore both start near each other as vassals of the same advanced AI empire. This can be purchases multiple times.

Scrying - 10 Prestige - Declared during empire selection, after a dice roll. The player using Scrying can reroll a dice rolled during Empire Selection. This can be purchased multiple times.

​*Excluding recent title-winners (who will be selecting last), all players returning from previous campaigns will be able to to select nations in order of their final ranking descending from top score to lowest score, followed by any new players in a randomly determined order, followed by recent title-winners in order of final ranking. A player who has played in earlier campaigns but did not participate in the most recent campaign will be allowed to use the final ranking of their latest campaign to determine their selection placement, and will be placed directly behind the player of equivalent ranking from the most recent campaign. Any players who missed more than 50% of sessions in their last campaign will not pick according to score and will be placed in the random pool with new players.
Scoring and House Rules
Game Length
The game will end in 2500.

Score
At each score interval, players will gain score equal to the sum of a players Empire Size, Subject Size, and AI Alliances, multiplied by year-based multiplier as described below:

Empire Score - The Empire Size value of the player's empire before any reduction modifiers. Empire Size with breakdown is visible in the top banner of the Stellaris UI.

Multiplier - The multiplier will begin as x1 for all players and increase based on the game year (see Scoring Intervals) and one-time accomplishments (see Bonus Objectives).

Bonus Objectives
Any scoring session in which a player achieves one of the following goals, his score multiplayer will get +1 for each goal completed in that session. Each goal can only be achieved once, so only the first player to achieve the goal gets the bonus and can only claim it once. The player must inform the host of the achievement by sending a screenshot with the date.
​
- Uncover, steal, or otherwise acquire an Ancient Relic
- Complete the first level of a multi-level Megastructure
​​- Defeat a Leviathan/Guardian creature
- Visit an L-Cluster
- Lead a Federation with at least 4 other members (AI or players)
- Have 2 Specialist Vassal empire.
- Host the seat of the Galactic Market
- Construct a Juggernaut class ship
- Become a level 5 Crisis

Protected Area/Sector
Players may not annex another player's homeworld system or any system they own within 1 system from their homeworld system. If a player violates this rule and is unable to immediately restore the system to its previous owner undamaged, compensation will be determined by the host at the end of the session (generally the transfer of additional systems/pops). All protection ends in 2400. 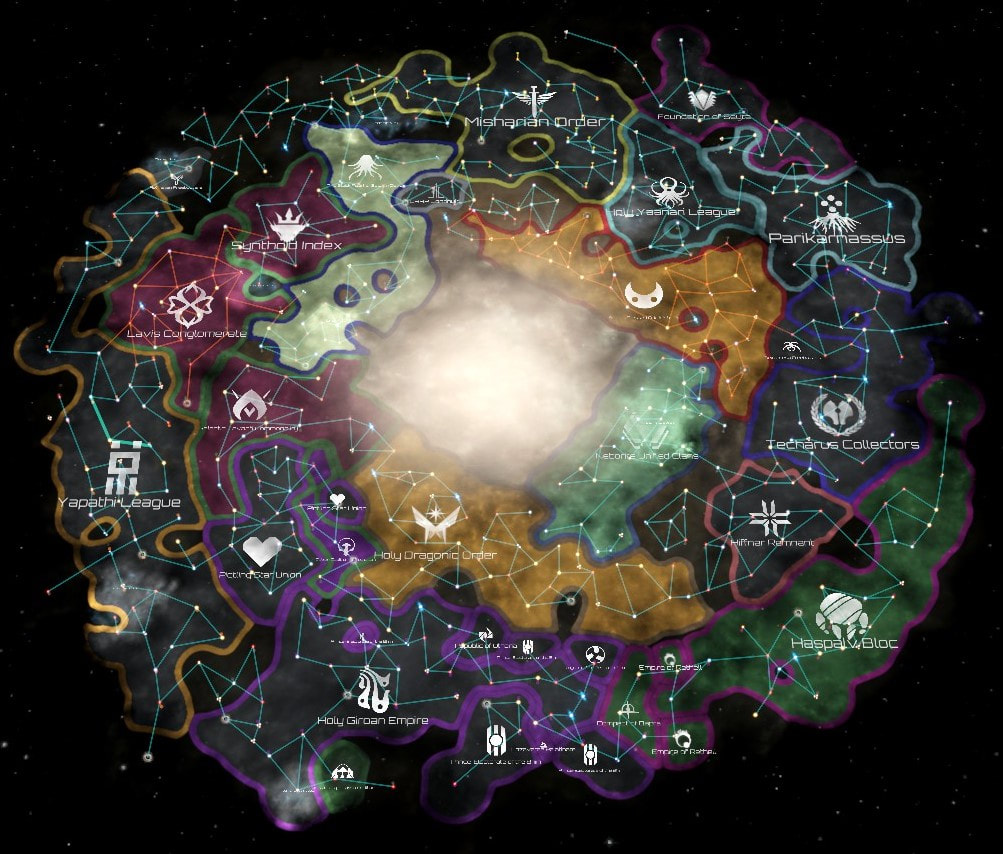 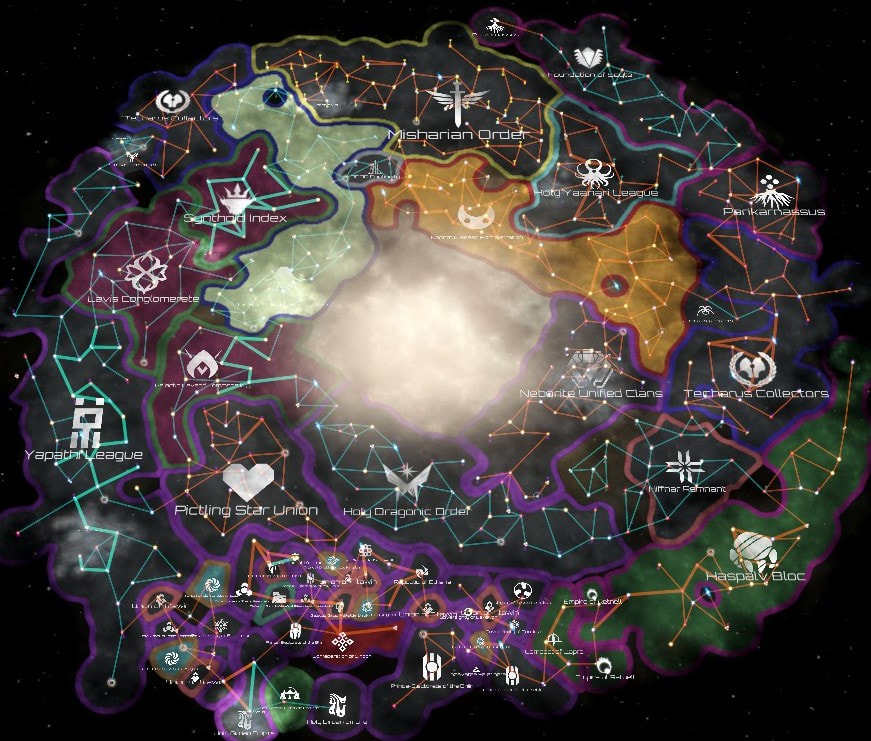 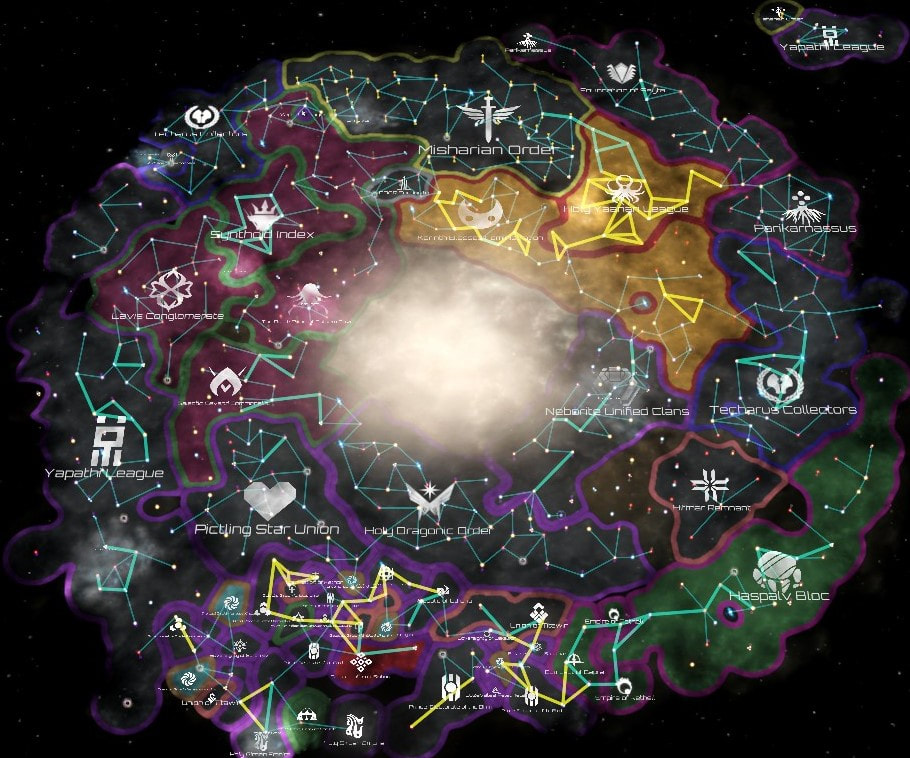 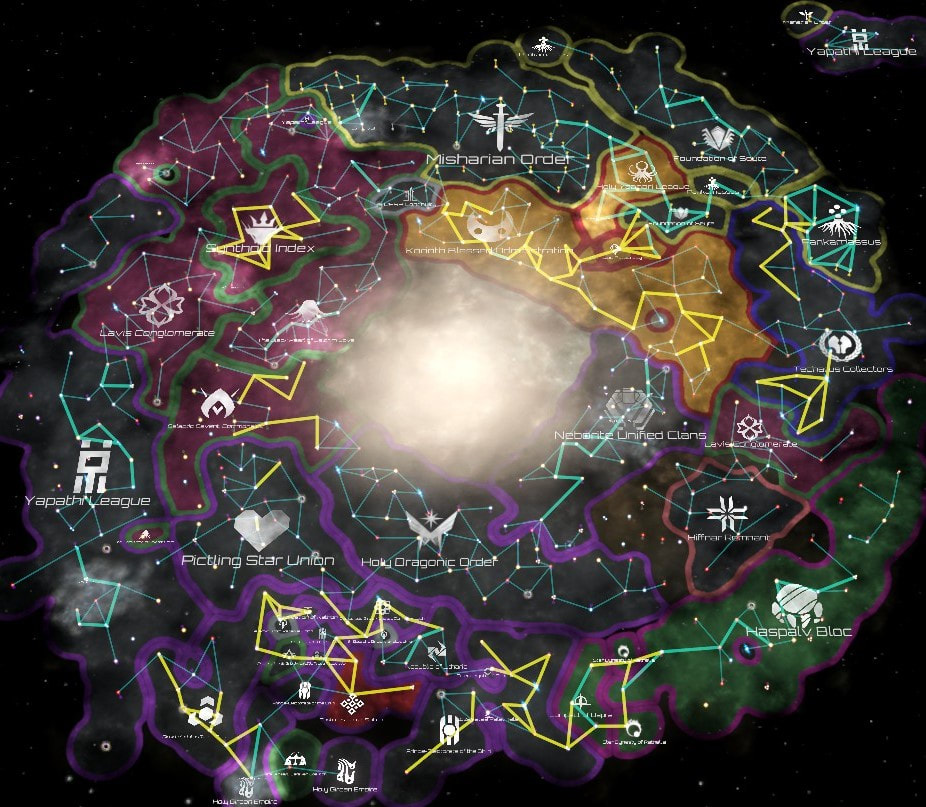 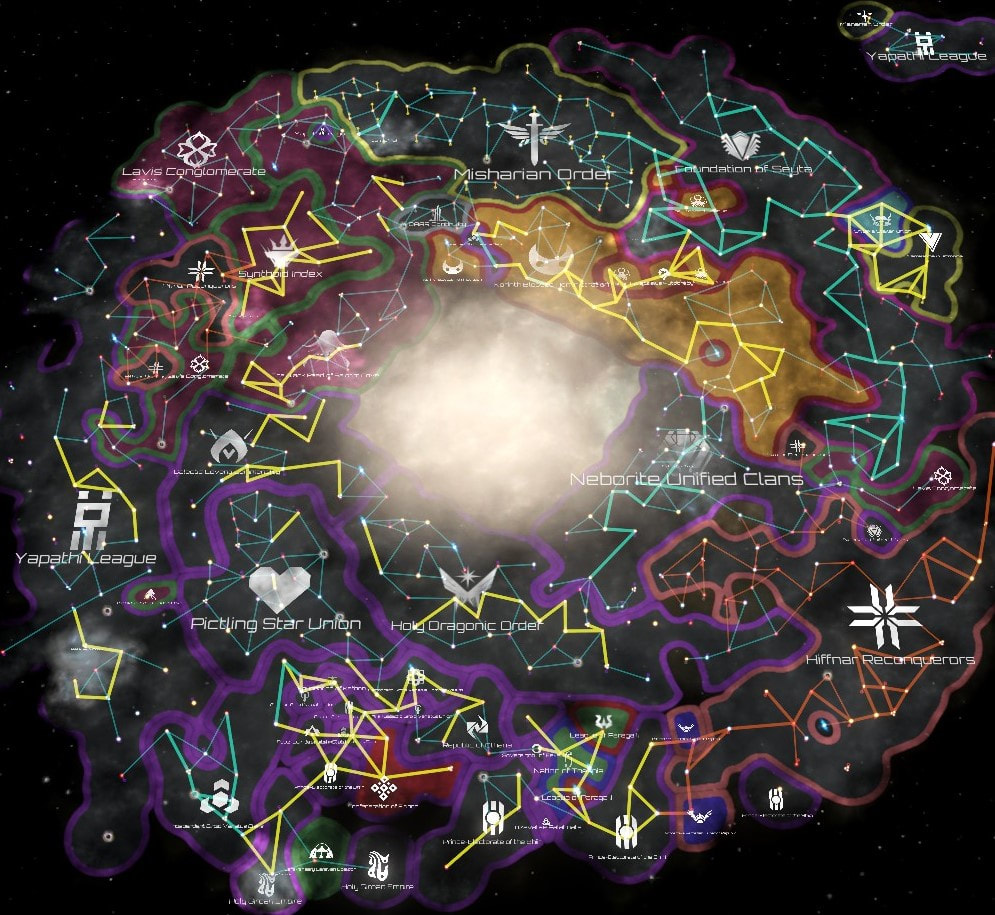 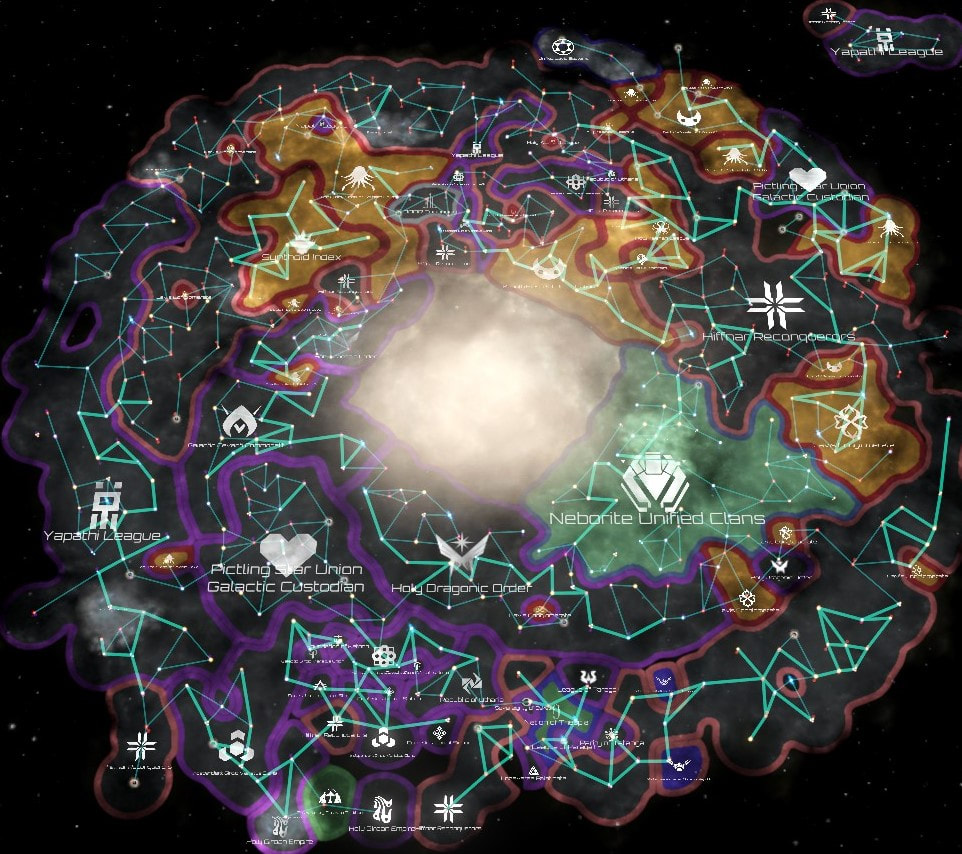 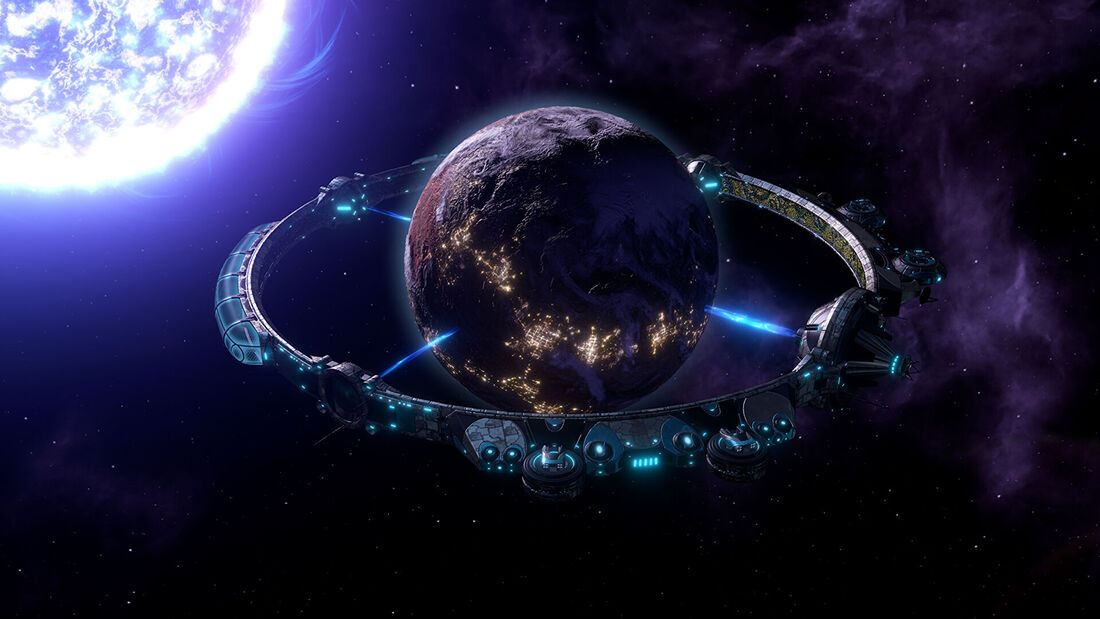