In-game points will be ignored for this campaign. Instead, players may accumulate points as described below.

Scoring Intervals
Scoring is counted on January 1st of every year. Achieving objectives is only counted at the start of each year, and will not count for any score if lost the day before. Unless otherwise stated these scores are multiplied by the World Tension, meaning objectives tend to become more valuable later in the game. Score might also be gained in some ways that are immediate and any immediate score will also generally be multiplied by the World Tension.

Advice: Rising World Tension gives extra freedom and options to Democratic and Non-Aligned nations, and will also determine the value of objectives. Objectives will be worth very little in the first years of the game, and will become more valuable as World Tension ramps up. This means that Fascist and Communist nations will have some control over how quickly objectives rise in value.  If you do not hold any objectives it would be wise to keep World Tension as low as possible until you have objectives to score from. Because aggressive actions generally increase World Tension, such actions should be limited to obtaining objectives or important resources or it will only be benefitting the players who hold the most objectives.

Advice: The strongest nations in this campaign have no scoring objectives within their starting borders and will need to go on the military or diplomatic offensive in order to score. Conquering Europe, building a large alliance, or a little bit of both should be the plan for these nations. The weaker nations range from those who might need to simply defend their own borders to win to those who will need to make opportunistic moves to expand while war wages around them. Joining a faction may be vital to survival or expansion, but will come with a cost to score. For these nations, Capitulation should be an expected possibility and they should be familiar with the methods of scoring detailed below and the Player Capitulation rules in Other Campaign Rules.

​Advice: While working together can be a sure way to victory in a war, stronger nations are incentivized to leave factions or create their own factions in order to maximize their score. A Faction Leader with enough scoring faction members can gain more score than his faction members without conquering any new land himself. Players that are subjugated by other players can hold on to their score by gaining as much autonomy as possible by either helping their new Overlord or by regaining Independence.

-Titles - In addition, the highest scoring player within each starting group will earn a title for their name on the Campaign Player List.
Top "Oppressor" score - "The Puppet Master"
Top "Opportunist" score - "The Partisan"

- Nation selection in a future campaign will go in order of prestige earned in this campaign, except players who received prizes will pick last (in order of final score).
Other Campaign Rules
1. Nation Selection

Selection Order - Nation selection in this campaign will draw from the final rankings of each player's most recent HOI Gametactica campaign (using the previous rewards description). Excluding recent title-winners (who will be selecting last), all players returning from previous campaigns will be able to to select nations in order of their final ranking descending from top score to lowest score, followed by any new players in a randomly determined order, followed by recent title-winners in order of final ranking. A player who has played in earlier campaigns but did not participate in the most recent campaign will be allowed to use the final ranking of their latest campaign to determine their selection placement, and will be placed directly behind the player of equivalent ranking from the most recent campaign. Any players who missed more than 50% of sessions in their last campaign will not pick according to score and will be placed randomly with all new players.

Please do not enter occupied War Camp channels unless invited by an occupant. These channels are available for both plotting in peacetime and coordination during wartime. Refusing to respect War Camp privacy will lead to being kicked from the Discord.

Puppets - If any player is loses their starting capital or over half of their starting provinces, they can request to be reinstated as a puppet at  the end of any session. At the start of the next session, the player will be reinstated with all provinces owned by the nation that holds the most of their starting provinces, plus their starting capital state if this would not already be included, as a puppet of the above nation. They can then choose to work with their current overlords or begin conspiring against them. A Government in Exile may choose to become a Puppet of their former enemy in this way, but cannot switch back to the Government-in-Exile. Puppet will forfeit a portion of their score to their Overlord (see Scoring)

Government-in-Exile - If a player becomes a Government in Exile, they may gain score from La Resistance (see Scoring).

Players with player-controlled subjects may not annex their subjects.

Peace Conferences will ignore the in-game points system and use the Player Controlled Peace Conference Mod and the below house rules:
​https://steamcommunity.com/sharedfiles/filedetails/?id=846066944&searchtext=player+led+peace

- All nations must be given the states they occupy at the end of the war unless the they have no access to that state through land they control or through sea (landlocked enclaves). Any such state must be given to a conference participant of the occupier's choice that does have access.

- All states that were not occupied at the end of the war must be given to the winning faction leader (weather player or AI) as puppet or satellite states where possible. The faction leader (or top scoring player if the faction leader is AI) may choose how to divide these states among puppets/satellites if multiple options are available. This will generally require all conference points be passed to a single player. If any states do not have an option to puppet then they are instead annexed by the faction leader if the faction leader has access as described above. If he does not have access then he must chose a nation that does to receive the state. A player controlled faction leader can give or trade these states with other players as described above.
​
- In all the above scenarios players may always choose to puppet or liberate any states they would receive or to simply leave the states under the control of their current governments.
​
This peace conference system unevenly rewards players who were able to go on the offensive in the war and will leave those who were forced to defend their own land with less to show for it unless you can convince other players to hand over their conquests. Keep this in mind before you allow other faction members to use you as their shield. Note that as land is occupied, it will generally go to a participant in the faction that has claims on it or shares a border with it rather than just to the owner of the forces that are present. 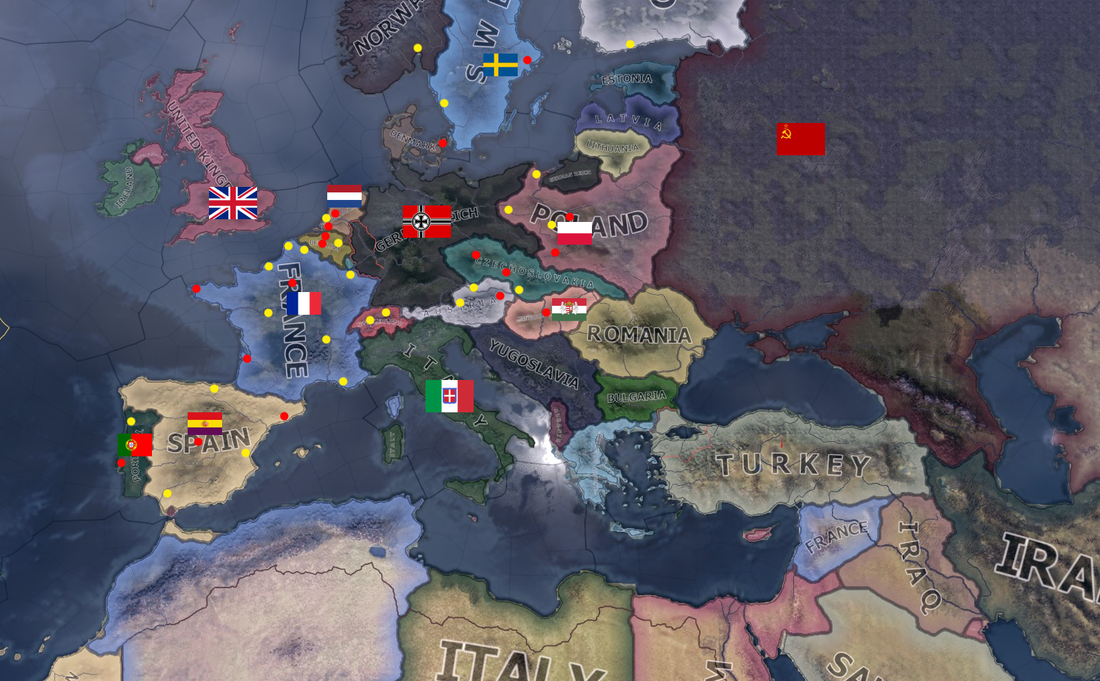