Scoring Intervals and Age multipliers
Scoring of all objectives will take place upon the election/inheritance of each Holy Roman Emperor. Objectives must be held/completed at that instance to count for scoring. Unless otherwise stated, these scores are multiplied by the number of the Age, meaning objectives become more valuable over time (Discovery - x1, Reformation - x2, Absolutism - x3, Revolution - x4).
Advice: Generally it is more reliable to obtain objectives as early as possible and defend them, rather than steal them. On the other hand, securing objectives early and aggressively can set the field against you in the campaign's early diplomacy. Waiting until the late game to make decisive moves can pay off, as the Age multiplier can quickly catapult a player into the lead as long as previous leaders are deprived of their own sources of score.

Scoring Groups
Each of the available nations in this campaign are in one of multiple scoring groups, with separate scoring rules for each group. These unique scoring rules may encourage certain thematic playstyles for each group, or focus the groups attention on specific mechanics of the game or regions of the map.
Advice: Allies from other scoring groups will likely be more reliable than allies from your own group, since you are less likely to directly compete over objectives or ranking. However, allies from other tiers are also less likely to be focused on similar goals.

Scoring Objectives
Objectives count as held by a nation if that nation owns it or if one of their AI subjects own it (the AI subject does not count as owning the objective unless otherwise specified). If an objective province happens to be in a player's protected area, the objective province does not count as protected. Any player that is a subject (including a tributary) must give the value of any objectives scored to his overlord (this includes any source of score unless specifically stated). If the subject has Liberty Desire, he will keep a percentage of his points equal to his Liberty Desire.

-Titles - In addition, the highest scoring player within each starting group will earn a title for their name on the Campaign Player List.
​!Clarification for this campaign: A player's starting group cannot change!
Top scoring Trader - "Prince of the Hanse"
Top scoring Bishop - "The Inquisitor"
​Top scoring Despot - "The Lion of the North"

- Nation selection in a future campaign will go in order of prestige earned in this campaign, except players who received prizes will pick last (in order of final score).
Other Campaign Rules
​1. Diplomacy Campaign Rules - Rules to frustrate our most successful players

- The Gametactica campaign mod will make maintaining alliances difficult for Great Powers, forcing them to use other diplomatic options such as Guarantees and Enforce Peace in order to shepherd their sphere of influence.

2. The 30% Treaty Rule - To encourage riskier and shorter wars

In order to encourage more frequent, shorter wars that do not devolve into world-spanning conflicts, we will be using the 30% Rule in this campaign. At any point in a war that the primary aggressor/defender has 30% or more war-score, they may send a peace treaty demanding a white peace or the annexation of one province that they occupy, that is owned by the primary defender/aggressor, and that they share a border with by land or sea, and this peace treaty cannot be refused. To be unrefusable, the treaty must contain no other conditions except a white peace or the annexation of the single province and the province must not be a nation's capital. The sending player may pause the game for this treaty, so that the war-score will not change and the rule can be enforced. For this rule, provinces owned or occupied by non-tributary subjects count as being owned or occupied by their overlord.

3. Home Area Protection - Protection rules to maintain a minimal power base of every player.

Any player who loses their capital Area holdings to another nation will be able to pay a nominal fee to immediately seize the territory back. In this way, each player's starting Area is safe from annexation and players are not allowed to eliminate other players.

4. Endless Player Restart - Protection rules to maintain a minimal power base of every player.

5. One-Time Absence Protection - Protection rules to maintain a minimal power base of every player.

During a missed session, a player may invoke protection for their nation one time. Other players may not attack a protected nation, and may not demand any peace terms from their nation if they find themselves at war by other means. Otherwise absent players' nations are not protected in missed sessions and players cannot take advantage of protection after the year 1750 regardless. If a war continues into a player's protected session, his enemies may not demand the ceding/release of land they did not occupy at the start of the protected session, or release nations that do not entirely exist within land they occupied at the start of the protected session, but other treaty terms that have no direct effect on province ownership are allowed in this situation. This protection is ignored in any wars initiated by the protected nation that target another player, so players are responsible for ensuring their nation is passive during their absence in their AI settings. Please inform one of the game hosts anytime before the start of a session if you will be absent and would like to use your protection. Protection may be used if arriving late but not for departing early.

6. Switching to a new Nation

Selection Order - Nation selection in this campaign will draw from the final rankings of each player's most recent EU4 Gametactica campaign (using the previous rewards description). Excluding recent title-winners (who will be selecting last), all players returning from previous campaigns will be able to to select nations in order of their final ranking descending from top score to lowest score, followed by any new players in a randomly determined order, followed by recent title-winners in order of final ranking. A player who has played in earlier campaigns but did not participate in the most recent campaign will be allowed to use the final ranking of their latest campaign to determine their selection placement, and will be placed directly behind the player of equivalent ranking from the most recent campaign. Any players who missed more than 50% of sessions in their last campaign will not pick according to score and will be placed at the end of the selection order in a random ranking determined by d100. A roll of 80 or higher will also place them before the 'title-winner' group, just to make things a bit less predictable.

Imbalance - Obviously, even within tiers, the nation choices are imbalanced in strength, making earlier selection positions very valuable for grabbing the "best" nations in any one tier. The choices available have been selected to allow each player good opportunities to use diplomacy and intrigue to compensate for any lacking in raw military or economic might. Any viewing of the previous campaign final rankings should be sufficient evidence to support the fact that starting nation strength does not predict final ranking.

Hidden Nations - Once any tier has had all available nations claimed, any Hidden nations in that tier will become available for selection, with possibly drastic changes to that tier's balance of power. This means that these secret nations will be impossible to pick by those with the earliest picks and that some unfortunate players may be be forced to select a lone available nation before more hidden nations become available. These new nations could be of major or insignificant power, may not appear at all if a tier is left unfinished, and will likely be great sources of hope and disappointment for those stuck with the last picks. The campaign designer(s) is not permitted to select one of these secret nations if any other choice is available.

Please do not enter occupied War Camp channels unless invited by an occupant. These channels are available for both plotting in peacetime and coordination during wartime. Refusing to respect War Camp privacy will lead to being kicked from the Discord.
The nations available are listed below, in order of most desirable starting conditions within each grouping.
The Hidden nations for each group will be revealed when all other nations in the group have been selected or if any player only has a single nation to choose from during his turn. 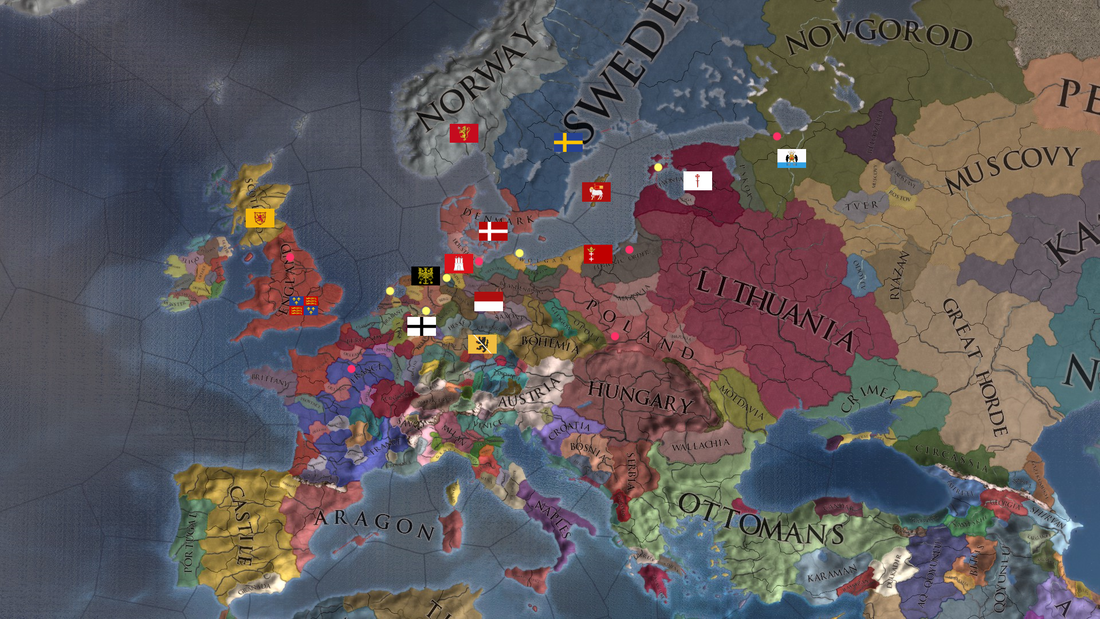