This campaign will focus on prospering in the shadows of Europe's great powers. The list of available nations features those that were significant political entities at one point but, by the end of the game's time frame, had diminished to minor footnotes on the pages of history. Initially, these nations will be under threat from the continent's larger kingdoms and will likely be forced to work together to ensure their continued independence. Survival will require well orchestrated alliances and the deft manipulation of conflict between the great powers. Those that successfully remove their immediate threats may then have the luxury of readjusting their diplomacy and those that find the greatest prosperity may find the world slowly turning against them in much the same way as those they replaced on the world stage.


House rules:
​
1. Victory cards are active in order to encourage realistic "shifting alliances" and other Machiavellian backstabbery, and to penalize being inordinately friendly with those you share a border with. Victory cards will only appear for a player if they reach at least 300 total development. If the territory dictated by a card is captured it will reward the player with an immediate boost in points (1000, 2000, 3000, or 4000 points) and provide 1 additional point per month it is held. Inversely, if a player's victory card includes land formerly controlled by another player, the previous owner will receive a negative modifier equal to half the value of the victory card and will have 1 point deducted from their score per month that the victory card is held. Therefore every player's top priorities should be to ensure that no victory cards are taken from their own territory, followed by capturing as many victory cards as possible and denying all cards to other players. Victory cards that appear on protected areas will be randomly reassigned at the end of the session.

2. Players may not annex, or directly cause the annexation of, any of the provinces owned by another player in the area of that player's capital, in any treaty they control, nor can they cause the release of a nation in any player's capital area in any treaty they control. Players may vassalize or otherwise subjugate a player, but may not diplomatically annex. A player's protected area will never change except when the capital is moved by a National Decision, and only if it would not cause an overlap with another player's capital area. Should a player change nations or fail to return to the game, the starting area of the player's abandoned nation will remain protected in this way and will never be available for annexation.

3. During their first missed session, other players may not attack the absent player's nation, and may not demand any peace terms from their nation if they find themselves at war by other means. Absent players' nations are not protected in further missed sessions and players cannot take advantage of protection after the year 1750 regardless. If a war continues into a player's protected session, his enemies may only demand the ceding/release of land they occupied at the start of the protected session, war reparations, gold, trade power, concession of defeat, and/or humiliation.

4. If a player is eliminated by the AI he may take over any unclaimed nation from the selection pool, or any nation with 0 points or less and will be moved to the lowest tier.
​
5. A player may use the vassal or colonial nation release mechanics to switch to playing a released subject. Similarly, a player may switch to playing one of their subject colonial nations or a vassal at the start of a session. This decision will likely change the player's capital area, and cannot be taken if it would cause any overlap with another player's capital area. This decision cannot be reversed.

6. In order to encourage more frequent, shorter wars that do not devolve into world-spanning conflicts, we will be using the 30% Rule in this campaign. At any point in a war that the primary aggressor/defender has 30% or more war-score, they may send a peace treaty demanding the annexation of one province that they occupy, that is owned by the primary defender/aggressor, and that they share a border with by land or sea, and this peace treaty cannot be refused. To be unrefusable, the treaty must contain no other conditions except the annexation of the single province and the province must not be a nation's capital. The sending player may pause the game for this treaty, so that the war-score will not change and the rule can be enforced.


Rewards:
​
- The top score from each tier will receive a prize with the first tier having first choice and ascending from there.
- A player who changes nations will not remain in his tier unless the new nation was one of the player's vassals or colonial nations. Changing to any other nation will place the player in the lowest prize bracket. This rule can be superseded by campaign specific rules.
- Nation selection in a future campaign will go in order of final score ranking in this campaign, except those who received prizes will pick last (in order of final score).

The nations available are listed below, in order of most desirable starting conditions within each grouping. 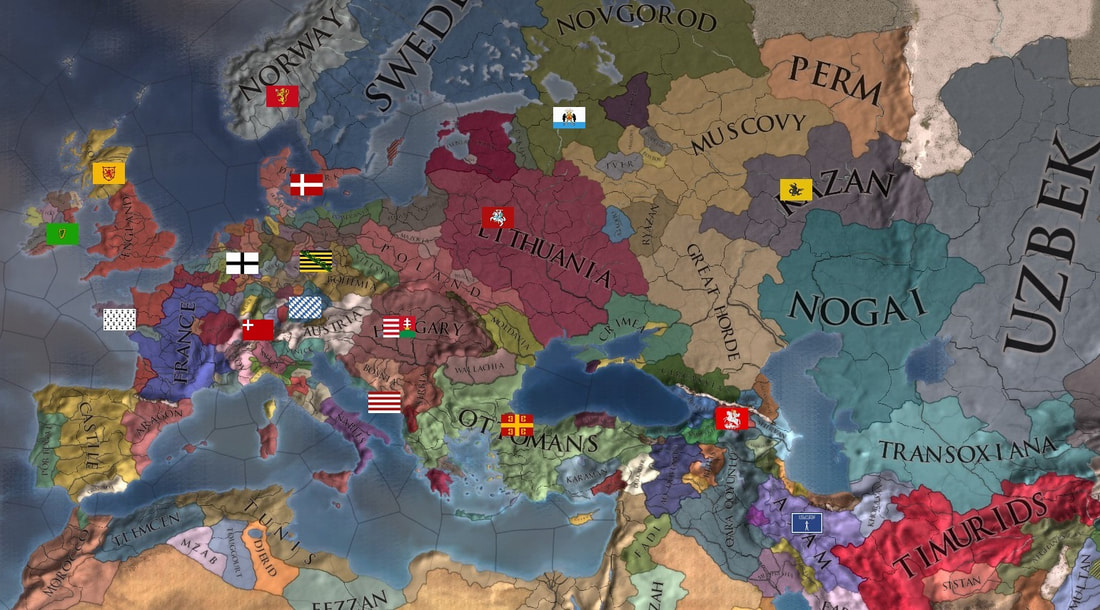 Children of the Viking Wars - Tier 1 (Unbridled Hardship and Misery)
​On the fringes of Christian rule exist the realms descended from ancient warrior cultures that once raided and terrorized their civilized neighbors. The Celts were early converts to the Christian faith while the Norse submitted much later, and in the years between the two cultures participated in a bloody era of conflict along the coastlines of the northern seas. Now they are inextricably linked by their shared history and similarly threatened by greater powers. Skilled leadership, smart cooperation, and a fair amount of luck will be required for them to avoid a fate as footnotes to history.

The Earldom of Leinster - Earl Donnchad MacMurrough-Kavanagh
- Starting Development: 10
- Provinces: 1
- Fort Level: 1
- Threatened by England
The Roman Empires - Tier 2 (High Difficulty)
​With the approval of the Holy Father, the emperor's crown officially passed to Charlemagne 700 years ago and from him to the numerous states of the Germanic peoples. Over the centuries, imperial rule has decentralized to a point that threatens to render the institution obsolete, and the various princes refuse to relinquish their independence for the goal of a united German empire. Refusing to recognize this transference of temporal power, the eastern remnants of the old empire in Constantinople still cling precariously to their exalted heritage.

The Empire of Byzantium - Basileus Ioannes VIII Palaiologos
- Starting Development: 41
- Provinces: 3
- Fort Level: 5
- Vassals: Athens (11 development)
- Threatened by the Ottomans
Lords of the Steppe - Tier 3 (Maximum Happiness)
Warfare on the steppe is rooted in horsemanship and a nomadic lifestyle. The great grasslands are difficult to hold in ownership and great warlords arise and fall among the clans just as fast. Some tribes have since settled their people in the habitable regions they have conquered and some outside powers attempt to extend their reach from the forests and mountains to the vast plains. The only certainty on the steppe is change.