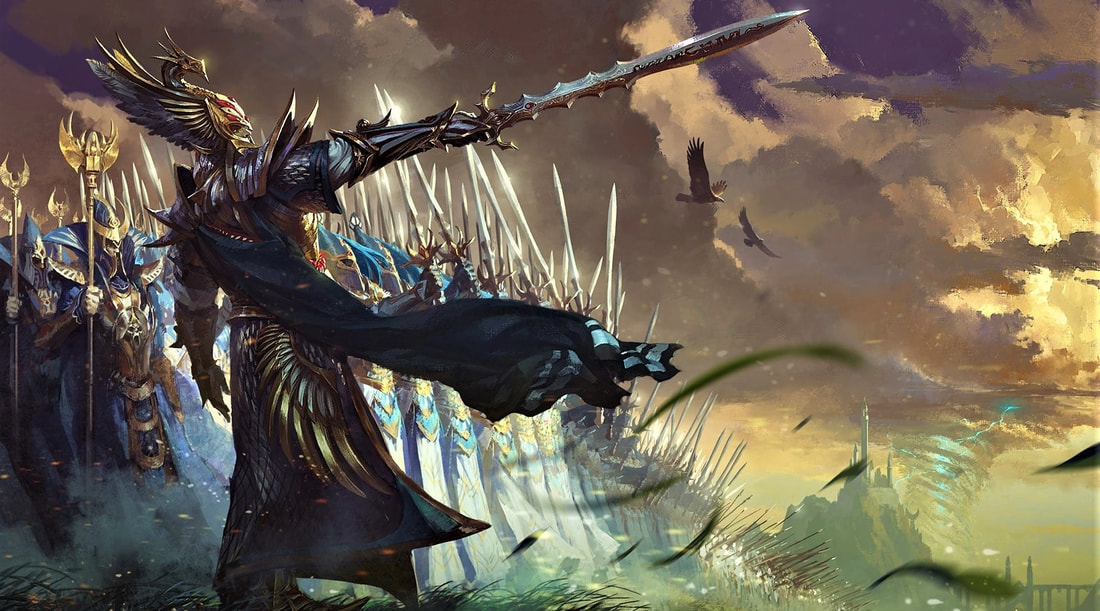 The High Loremaster
and the Lustrian Campaign

​The origins of the campaign spring from the arrival of the twin-tailed comet in the winter of 2302 IC. I am aware that the event was determined to be an omen from Sigmar by the Grand Theogonist, foretelling the coming invasions and calling for his people to band together, but in Ulthuan the spectacle was known as Khaine's Tear, an ill-fortuned reference to the bloodiest of the gods within their Divine Mandala. As I attended the High Loremaster and his noble brother at the Phoenix King's council, I learned that this astronomical event was accompanied by troubling developments. The king's seer-priests brought forth evidence that the comet was the first step following an esoteric prophecy of dire consequence, while the enclave of archmages reported substantial instability within a millennia-long ritual maintained by the elves, essential to their manipulation of the magical winds. Both parties insisted that immediate action must be taken to avert disaster. As you are aware priests and wizards rarely agree, and it did not surprise me that their accordance was greatly concerning to the High Loremaster and his brother, Prince Tyrion. I was not privy to the siblings' later debates in their private council with the Phoenix King, but I understand that they departed in heated disagreement.

What I do know is that Lord Teclis had obtained sanction and resources for a military campaign of unprecedented scale since the withdrawal of the elves from our domains. While Prince Tyrion would remain in Ulthuan at the right hand of the Phoenix King, Lord Teclis assembled the Order of Loremasters and requisitioned a fleet for the first stage of his quest. At his invitation, I joined four regiments of Sapherian citizen-militia and a honor-guard of expeditionary Swordmasters, known as the Seekers of the Flame, on a voyage across the Great Sea. Our destination was a far flung elven colony among an otherworldly chain of islands on the distant side of the mysterious and hostile Lustrian continent. Well into our journey, shortly after restocking at the Citadel of Dusk, the Order's fleet was joined by a creature that I had only come across in the too-few elven volumes that have been collected by the Great Library. Previously skeptical to its existence as any more than a prominent elven metaphor and sacred symbol of their high monarch, I was elated to personally witness the graceful flight of a phoenix as it followed the fleet before landing on the High Loremaster's ship. Contrary to what you might have expected, this phoenix exuded a crippling chill, draining all heat from the tropical air. Sentient and intelligent, the phoenix, called Narissalis, was an ally of the High Loremaster's, and communicated with Lord Teclis in a form of the elven language allowing me to glean some of the relationship between this mystical being and the High Loremaster.

The archipelago that was our destination, called the Turtle Isles for its numerous different species of the shelled reptile, varying in size from that of a mouse to larger than the ferries you might see out your window on the Reik River, was to serve the High Loremaster and his order as the base for his campaign into the continent in search of ancient waystones and their fragments. These waystones are integral in a series of rituals that the Order of Loremasters intended to use to stabilize the Great Vortex and thwart the powers that intended to wrest its control away from their grasp. The only record, to my knowledge, of human exploration on these fascinating islands is the journal of Moleri de Bordeleaux , the renegade Brettonian captain, and his writing was sorely lacking in observations on their astounding ecology. Accompanying this account, you will find a series of natural studies, non-political in subject, that I request you forward on to the university.

On Great Turtle Isle, the largest in the chain, the graceful spires of elven towers greeted us long before we sailed into harbor. The colony was not large, but thrummed with activity at the Order's arrival. All authority in the colony was given to the High Loremaster, who delegated its administration in favor of personally planning the coming expedition he would lead. Lord Teclis's chief adviser and the head of his own council, Loremaster Talarian, was responsible for coercing the resident nobility and bringing all the resources of the colony to bear in support of his master's work. From this point, the true endeavor would begin...