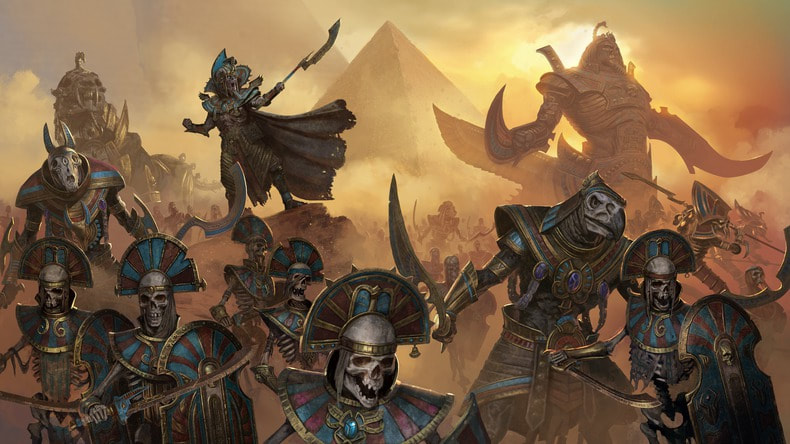 The Imperishable
and the reclaimation campaign

When the Awakening arrived, I emerged from the tomb to a mockery of eternal life. Through powerful incantations placed over their resting places or sheer force of will, others of my house accompanied me, from noble relatives that I had never known in my past life to common servants that I had seen everyday, however, the great majority did not possess the willpower or desire for their souls to return to their remains. The liche priests knew many ways to force their reanimation, but while this binding ensured their obedience, their personalities would stay dormant.

​At his emergence, we did not stand against Settra the Imperishable. For the sake of Khemri, my father, my children, and I bowed before his command and returned to our slumber. Now, I have been recalled back into this bleak new existence by the priest, Nerutep, to serve Khemri once again and lend the strength and wisdom of my line to the Imperishable's cause. In my first life I was Priest King Pherras Bakenneru of Khemri, High King of Nehekara, but in my second life I will be known as a Tomb King, a scourge to the puppets of Sakhmet, and an enforcer of Settra's will, for his ambition is now the last hope of the Nehekarans. Until its realization, I will rebuild Khemri in expectation, preserve our written heritage, and slay those who stand against us.

Since the start of his unliving reign, King Settra has brought vengeance on the defilers of Nehekara, sometimes leading the legions far from the desert sands to reclaim what is ours, and now the Imperishable desires reclaim the loathsome Books of Nagash, the Betrayer. The followers of the liche priest who disturbed my rest, Nerutep, have unearthed a keystone, an obelisk describing an opportunity with which the Black Pyramid may be opened during this passing of the Two-Headed Vulture. Between the obelisk and Nagash's writings, Priest Nerutep has demonstrated that the pyramid shows an affinity for the celestial traveler and could be manipulated, bent to the will of the Imperishable. Not all of Nagash's books must be found, a task that would likely be impossible, as many may have been destroyed, but a number of key works are needed.

Two threats currently exist to Khemri, however, that would be unwise to ignore in favor this search. Fortunately, my words were echoed by Priest Nerutep and many of the other kings that the Imperishable deigns to listen to. The orcs of the Badlands have prospered under a new warlord, called "The Tooth Taker" and spread into the desert, destroying all they touch. As they have encountered the defenders of Khemri, more have been attracted to the Salt Plains in anticipation of battles with our eternal warriors and threaten to overrun the kingdom. While the orcs gather to the north, a cabal led by one of Nagash's students has gathered in the great necropolis of Bhagar to leech off our realm's power and desecrate the remains of our subjects. Though they have made no move against Khemri, they are an affront to all true Nehekarans and must be sent to the gods for judgement. These enemies must be confronted quickly, as Nerutep has also informed the kings that Nagash's most powerful servant, Arkhan the Black, is also awake and searching for the means to activate his lord's pyramid.
The Legion of the First 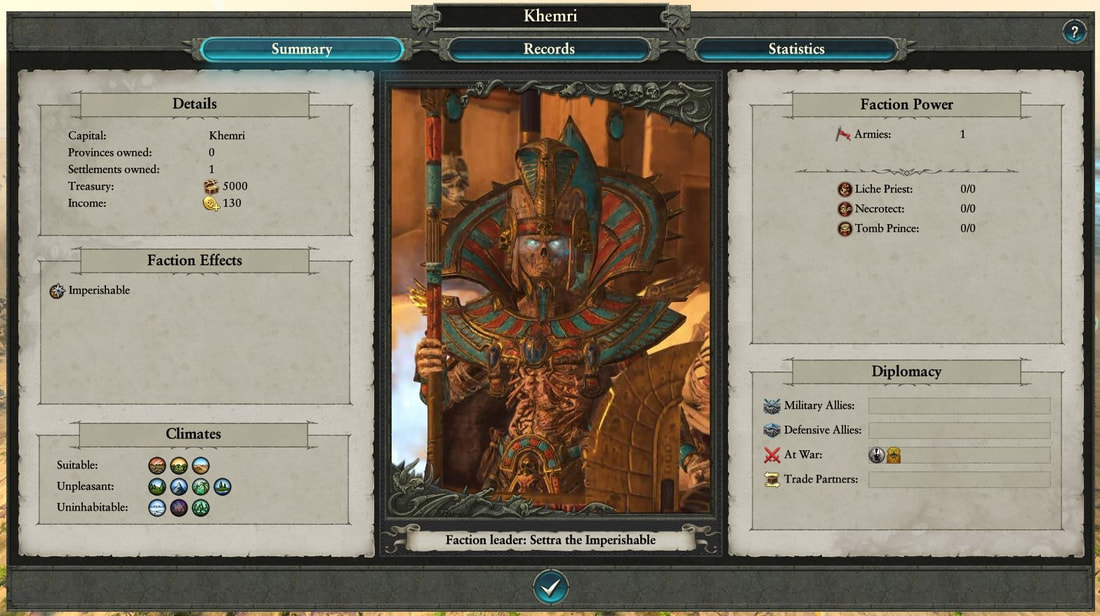 As my physical form regained strength, I followed the Imperishable to the northern coasts where I watched him engage the savage foe, defeating them on the Salt Plains and retaking the ruined mines. Citing the orcs' endless enthusiasm for warfare, I urged Settra to pursue their warlord and destroy his settlements in the Badlands, despite Priest Nerutep's desire to move south to the mountains, where one of Nagash's codecies was thought to be hidden away. Exemplify my concerns, the warboss of the orcs While the Tooth Taker regrouped by the Ash River, Settra destroyed his settlements at Gor Gazan, and then assualted the fortress of Galbaraz, deeper in the Badlands. The fortress's gates were smashed by the Keeper of the Vacant Tomb and its defenders overrun by the legion, but the Tooth Taker took his forces on the move and headed instead further into Nehekara. Following for weeks along the Great Mortis River, Settra finally caught their encampment along a nameless region of dunes. Here the Tooth Taker's horde was utterly demolished. Confronted with such complete defeat, the warboss lost all power over his warriors and the tribe disbanded, dispersing into the wider wastes.

During this time, Settra had ordered that the city of Zandri must be reinhabited, its soldiers awoken to serve his will. In the ruins we encountered scavengers from foreign lands, from which learned that foreign colonies now occupied much of the coast west of the city. Though I sympathized with King Settra's desire to obliterate these invaders, I cautioned that they may prove useful to our more urgent tasks and should be ignored for the time being. Similarly, I suggested tolerance of King Necatnebo's refusal to bow before King Settra, and to not waste our efforts fighting the kings of Numas. Much more difficult was averting was with the Rakaph when King Hakor began brazenly raiding Khemri's outlying necropoli in direct challenge to Settra's authority. War with the Rakaph would have taken our soldiers far into the western deserts and allowed the Nercarch parasites to thrive in our absence. As our army was encamped across the Great Mortis River from the camp of King Hakor, Settra allowed me to speak with his rival. Though I would not reveal the details of our great plan, I assured Hakor that his independance was under no threat, pointing out that we defended Nehekara from the orc and the vampire while he chose to raid his own people. King Hakor agreed to peace and I later heard that his forces had now turned to fighting foreign colonist in the far west.

To Nerutep's delight, we were finally able to turn our attention south. Settra desired to take the great necropolis of Bhagar from the Necrarch Brotherhood before venturing into the World's Edge Mountains to hunt down Nagash's codex. My strength returned, I had the priests open the pyramids of my family and call forth whatever warriors and servants they could, including Neru's Portal, a blessed Casket of Souls. While my army was summoned, it was decided that Bhagar was too well defended to invest. Instead, I was sent to capture the Springs of Eternal Life, a vital resource of the Brotherhood, while King Settra took his army into the mountains. As Settra wreaked havoc among the mountain tribes of orcs and goblins, my soldiers awaited in ambush for the Brotherhood to reclaim the Springs. The trap succeeded, and I caught the loathsome Lord W'soran in the foothills south of the Springs, destroying his rotting army. Unfortunately, King Settra's success in the mountains did not allow me to capitalize on my own as a horde of orcs and goblins had emerged from their tunnels among the foothills, seeking revenge for the destruction of their dens. Another slaughter ensued outside the Springs of Eternity, my warriors blades serving just as well against the living as the dead. These victories proved not only my right to command, but the capability of those entombed to serve my dynasty. Meanwhile, King Settra had found the Codex Mortifica in a ruined stronghold on the Lost Plateau. The skulking necromancers that inhabited the spire, had long ago been killed by the mountains' goblins. Their pathetic manipulations of death unable to prevent their own.
Major Battles
Battle of the Salt Plain - King Settra defeats Skafag Toof-Taka's counterattack to reclaim the Salt Plain.
Assault of Galbaraz - King Settra defeats Sour Gork's Chosen to uproot Top Knots from southern Badlands
Battle of the Springs - King Pherras catches W'soran in the foothills south of the Springs
Ambush of the Lost Plateau - Settra ambushes and routs Greebitz Blackbog in the mountain passes
Battle of the Sprinds - Pherras destroys Grizgutz Backstab
The Legion of the First 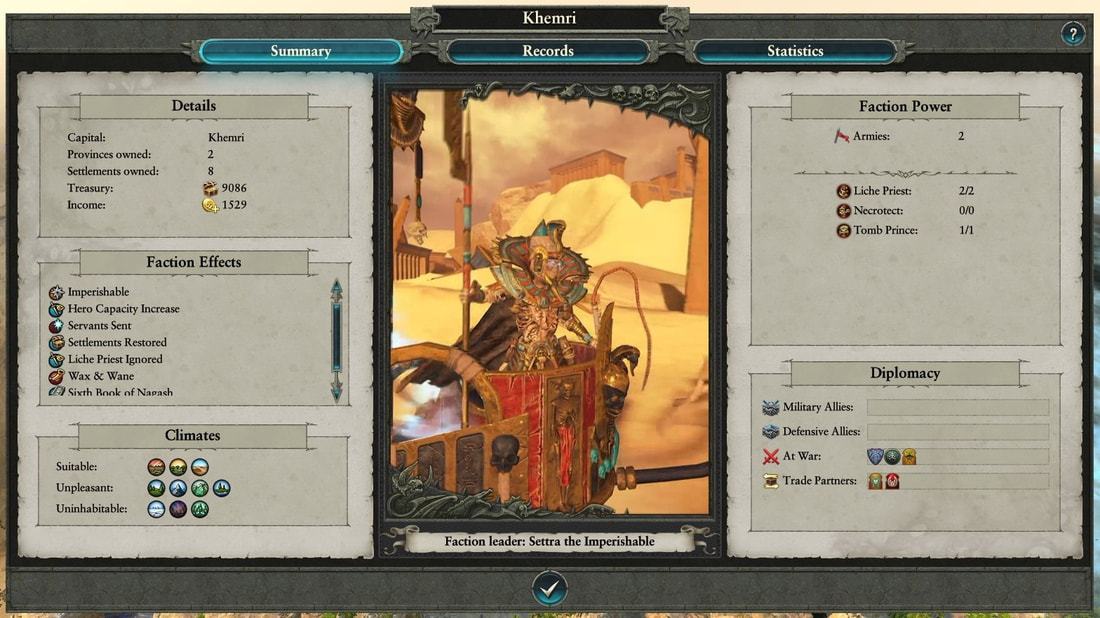