Prologue - A day Late, and a Shilling short

The patrols to the east of Altdorf will be late by up to a week. Rutger’s escort from Marienburg was attacked by beastmen near Kurhafen, and he will not be in fit shape to move for at least a few days. Two coachmen were killed, and much of the property of one Klaus von Rothstein was lost. With the assistance of an elf and a member of the Altdorf colleges, I arrived in time to help Rutger and the merchant escape before more beastmen descended on us. There was a strange dwarf that helped too. He said he was a ‘slayer’ and had his hair dyed orange. I have never seen anything like it. I’ll tell you more when I see you.

I’ll be helping Klaus von Rothstein get what goods he salvaged booked at the Importers’ Guild before I go. The elf had a private interest in the delivery, and I want to double check that everything is in proper order. We can’t have the foreigners thinking that Reikland’s roads are lawless, and I know you said we have had a jump in smuggling from Marienburg.

Birgitta Tageslicht
via Edwin, Scribe for the Reikland Importers’ Guild 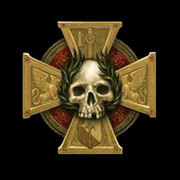